Displaced migrants’ backpacks exhibited in the US, not in Italian museum

An image of backpacks hanging on a wall has been shared in social media posts claiming to show “bags of Africans who died while trying to cross the Mediterranean sea” in an Italian museum on the island of Lampedusa. The posts raise concern over risks associated with illegal migration, but the accompanying image was taken at a US exhibition of objects found on the border of the country with Mexico.

The photo shows hundreds of bags attached to a wall. “African Bags In Italy Have Stories (sic),” reads the caption in one of the posts shared with the image in Nigeria.

“There is a Museum on the island of Lampedusa in Italy where the bags of Africans who died while trying to cross the Mediterranean sea are collected and showcase (sic).” 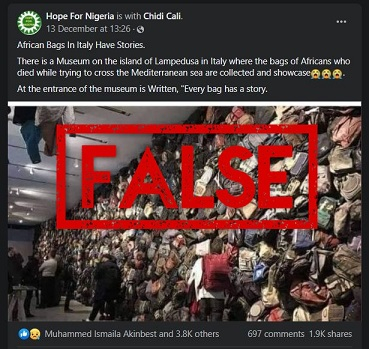 Nearly 2,000 people have shared the claim on Facebook since it was published on December 13, 2021.

Many online users in the post’s comment section expressed their disappointment over the attitude of African leaders and the horror implied by the exhibition of the bags, which purportedly belong to Africans who died trying to cross the Mediterranean to reach Europe. 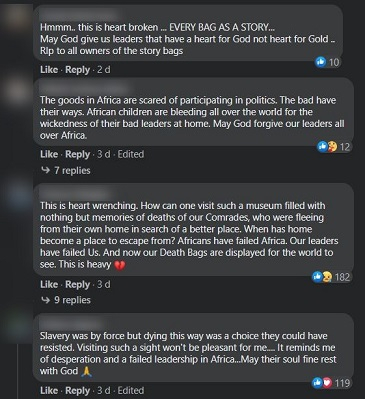 Screenshot taken on December 16, 2021, showing some of the comments

Death in the Mediterranean

CrowdTangle’s data show that the claim strongly appeals to African online users who are empathetic to the ordeals of people fleeing the continent for Europe by boat.

The Italian island of Lampedusa, where undocumented migrants from the Sahara Desert in Libya or Tunisia often arrive after a perilous sea crossing, is located just 140 kilometres from the Tunisian coast.

At least 614 people have so far drowned in the Mediterranean this year while trying to cross its waters, according to the International Organization for Migration (IOM). Their remains were mostly discovered ashore in coastal areas in Africa and Europe, including Lampedusa.

European Union-funded migration media outlet InfoMigrants reported that objects recovered from migrants were displayed in a Lampedusa museum in “tribute to these people, who risk their lives in search of safety and better opportunities”. 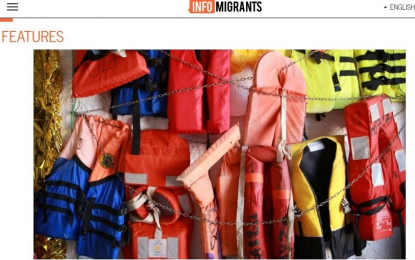 Screenshot taken on December 17, 2021, showing the image on InfoMigrants’ website

However, the image circulating on social media is unrelated to the Lampedusa museum. It was, in fact, taken in the United States, and the backpacks were collected from people trying to cross the Sonoran Desert into southern Arizona.

The “State of Exception” Exhibition

A reverse image search led to this 2018 online report titled “The Human Condition Through Arts and Humanities”. It included a section on the “State of Exception” exhibition where hundreds of backpacks collected along the US-Mexico border were artistically displayed on a wall.

The collection was part of a year-long research project called “An Exhibition of the Undocumented Migration Project”.

We searched the title of the exhibition on Google and found the same image on the website of the Institute of Humanities at the University of Michigan in the US.

“The original exhibition of State of Exception, a collaborative project between Richard Barnes, myself Amanda Krugliak, and Jason De Leon premiered in January 2013, through March 15, 2013,” Amanda Krugliak, arts curator at the institute, told AFP Fact Check.

The artwork was later featured in the New York Times Magazine in 2013 and won the Latinx Spirit Award at ArtPrize 2015.

The project was presented at the Parsons School of Design in New York in February 2017, Stephanie Harrell, spokesperson at the Institute for the Humanities of the University of Michigan, told AFP Fact Check on December 13, 2021.

By accessing the photo’s metadata using the InVID WeVerify tool, AFP Fact Check confirmed that the image was originally taken on February 2, 2017, the same day the Parsons School of Design’s live broadcast on Facebook showing the stacked bags. 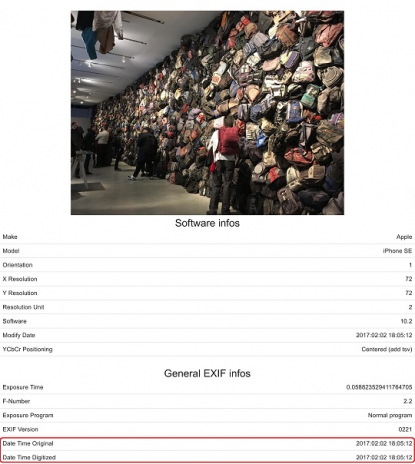 “The image circulating in the erroneous article is from the Parsons exhibition in NY and a photograph by Richard Barnes,” Krugliak disclosed.

In addition, Harrell dismissed social media posts linking the bags to Italy and explained that “the backpacks represent migrants crossing into the United States from Mexico.”

Migration along the US-Mexico border

The border between Mexico and the United States is one of the major migration routes globally for migrants from Central and South America, as well as Haiti, who are fleeing their countries in search of a better life.

The influx of illegal migrants into the US peaked in 12 months leading up to September 2021 when 1.7 million undocumented travellers attempted to cross to the US.

In addition, more than 200,000 migrants were apprehended in July for attempting to migrate to the US illegally through Mexico – an “unprecedented” number, according to US Homeland Security Minister Alejandro Mayorkas.

“We are facing an unprecedented number of migrants between the entry points of our southern border,” Mayorkas said then.