A video has been viewed millions of times on social media alongside a claim it shows volcanic activity at Indonesia's Mount Semeru in December 2021 — an eruption that has killed dozens of people. The claim is false. The video has circulated months before the Semeru eruption. The clip has been created digitally from an image of a volcano in Chile and a picture of a waterfall in Indonesia.

The seven-second video appears to show Mount Semeru — the highest mountain on Indonesia's Java island — spewing ash into the sky.

"Semeru Mountain volcanic eruption from 2 days ago," reads this tweet, which was posted posted on December 7, 2021.

The video had been viewed more than 719,000 times before it was removed. 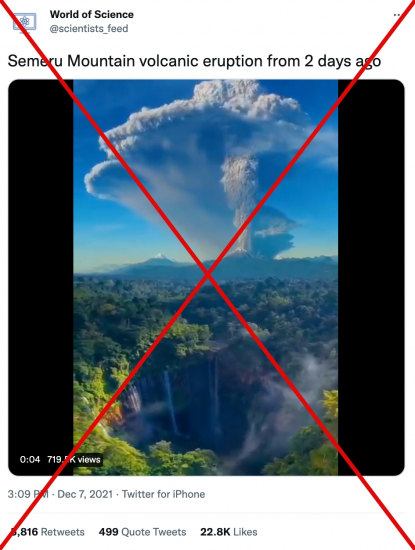 At least 48 people have died since the volcano began to erupt on December 4, 2021, according to Indonesia's National Disaster Management Agency (BNPB).

The video was also shared with a similar claim here, here and here.

It has garnered more than five million views after it circulated with a similar claim in other languages, like in Indonesian on TikTok here and on YouTube here, in French on Facebook here, and in Chinese on Weibo here and here.

A reverse index search on Google, using a keyframe from the misleading video, found this video, posted on TikTok on June 15, 2021 — nearly six months before the Semeru eruption.

The Vietnamese-language caption says: "Please use 2 words to describe this picture of nature."

A reverse image search on Yandex, using one of the keyframes of the misleading clip, found this image on the website for stock photography agency Alamy.

Captured by photographer Cesar Santana, the image's title reads: "Volcano Eruption. The eruption of the Calbuco volcano in the Chilean Patagonia at daytime. April 2015".

The location is given as: "Puerto Montt, Región de los Lagos, Chile".

Below is a screenshot comparison of the video in the misleading post (L) and the Alamy image (R): 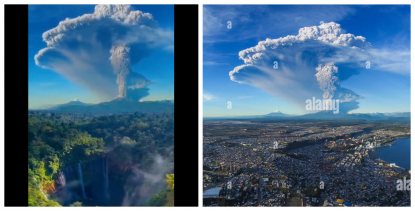 AFP published two photos on the Calbuco volcano's eruption on April 22, 2015, here and here, which show a similar ash column and mountain range.

The video in the misleading posts used an old photo of an Indonesian waterfall in the bottom half of the screen. It was published more than a year before the eruption of Mount Semeru.

A reverse image search on Yandex using one of the keyframes of the misleading clip found this image published on the design material website Lovepik.com on March 7, 2020.

Tumpak Sewu waterfalls are located at the foot of Mount Semeru, in Indonesia's East Java province.

Below is a screenshot comparison of the photo in the misleading posts (L) and the Lovepik.com image (R): 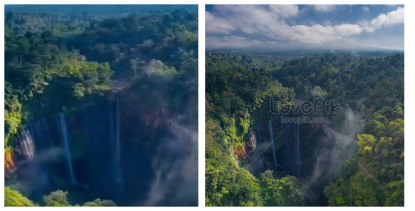 Screenshot comparison of the photo in the misleading post (L) and the Lovepik.com image (R)

Similar aerial views of Tumpak Sewu waterfalls have been captured by other photographers, such as here, here and here.

Kristianto, coordinator of the volcanic hazard mitigation team at the Indonesian Center for Volcanology and Geological Hazard Mitigation (PVMBG), confirmed that the clip does not show the Indonesian volcano.

"Regarding the video above, we can see a picture of Tumpak Sewu waterfalls with a backdrop of an erupting volcano, it can be certain that the erupting volcano in the background is not Mount Semeru," he told AFP on December 12, 2021.

AFP published this video on December 7, 2021, showing the eruption of Mount Semeru.