A video has been viewed millions of times in social media posts that claim it shows a stream of lava from the eruption of Mount Semeru volcano in Indonesia in December 2021. The claim is false: the video actually shows a lava flow from Kilauea volcano in Hawaii, according to scientists. The video corresponds to similar footage of Kilauea from 2017.

"Goosebumps...Lava (said to be Semeru) was caught by a drone..." reads this Indonesian-language Facebook post, published on December 5, 2021.

The 18-second video, which shows a stream of lava pouring out from the side of a mountain, has been viewed more than 1,600 times. 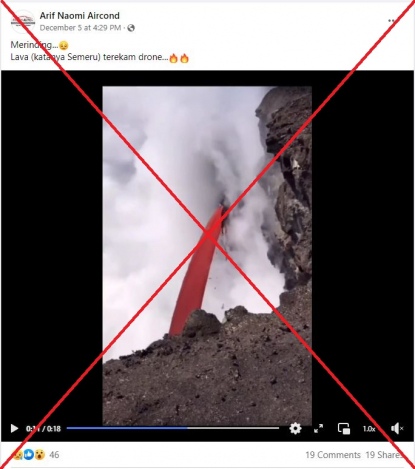 A spokesperson for the country's National Disaster Mitigation Agency told AFP on December 7, 2021, that the death toll from the eruption had risen to 34, while 17 were missing and nearly 3,700 had been evacuated from the affected area.

The video has been viewed more than 15 million times after it was shared with a similar claim on Facebook here and here, on Twitter here and here, and on TikTok here.

It also circulated with a similar claim in Chinese on Weibo here and here.

A reverse image search on Yandex, followed by keyword searches on Google, found a similar video was published here by the US Geological Survey (USGS) agency on January 28, 2017.

A description at the start of the video indicates the footage is of Kilauea volcano taken by the USGS Hawaiian Volcano Observatory.

Below is a screenshot comparison of the video in the misleading post (L) and the USGS video (R):

Hawaii's Kilauea volcano has erupted dozens of times since the 1950s, making it one of the world's most active volcanoes.

Similar footage showing the stream of lava from the Kilauea volcano was also published by the Associated Press (AP) news agency here on February 2, 2017, crediting it to the owner of the Hawaii-based Lava Ocean Tours.

A stream of lava, dubbed a "firehose flow" by the USGS, gushed from a lava tube at the Kamokuna ocean entry on the southeast side of Hawaii's Big Island, AP reported on the same day.

The tube had been exposed by a huge 26-acre lava delta, which collapsed into the ocean at the site on December 31, 2016.

Dr Ken Hon, the scientist-in-charge at the USGS Hawaiian Volcano Observatory, confirmed to AFP that the volcano in the misleading posts is Kilauea and not Indonesia's Mount Semeru.

"What I can tell you for sure is that sure isnʻt Mt Semeru, but it definitely is Kilauea," he said.

The USGS team also shared similar images of the lava "firehose" from their archives here.

"The firehose was intermittently active in 2017, but not since then. Lava flows from Kilauea have not entered the ocean since 2018," the team told AFP.

AFP published this video on December 7, 2021, showing the eruption of Mount Semeru.

AFP found no credible reports from Mount Semeru's eruption that show similar scenes of a lava stream pouring from the side of the mountain as seen in the misleading posts.