A video has been viewed hundreds of thousands of times in social media posts that claim it shows a helicopter crash in India that killed India's defence chief General Bipin Rawat and twelve others on December 8, 2021. The video has been shared in a false context: it has circulated in reports since 2020 about Syrian rebels downing a government military chopper in eastern Idlib.

It shows a burning helicopter falling through the sky before it breaks up into pieces. 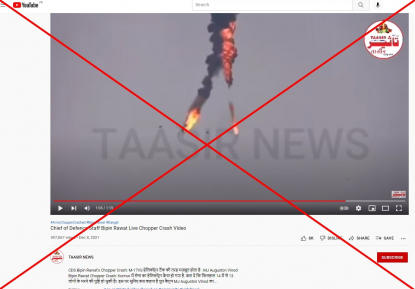 Screenshot of the viral misleading video taken on December 8, 2021

Bipin Rawat, India's first chief of defence staff, was travelling with his wife and other senior officers in a Russian-made Mi-17 chopper, which crashed near its destination in southern Tamil Nadu state.

A reverse image search of the keyframes of the viral video found an article by the Centre for Economics and Foreign Policy Studies (EDAM) here that included a frame from the same video.

The article published on February 12, 2020 is about Turkey's counter-offensive against the Syrian Arab Armed Forces.

It mentions an attack on a Syrian helicopter by the Turkish-backed rebels.

The image's caption reads: "A Mi-17 helicopter was shot down by the armed opposition around al-Neirab."

Below is a comparison of the screenshot of the viral video at the one-minute six-second mark (L) and the image posted by EDAM (R).

A keyword search found the video was previously shared here on Twitter on February 11, 2020 -- more than a year before the crash that killed India's defence chief Bipin Rawat.

The caption of the 2020 video says, "An hour ago, this Mi-17 utility helicopter of #Syria Arab Air Force was shot-down over Al-Nayrab, #Idlib. #AlQaeda affiliated & #Turkish backed militias are trying to take responsibility, but it is certainly known that #Turkey targeted this helicopter."

Below is a screenshot comparison of the video with the false claim (L) and the 2020 video (R).

The video's description reads: "Syrian rebels claim to have shot down a government helicopter Tuesday in the country's northwest where Syrian troops are on the offensive in the last rebel stronghold, opposition activists said. (Feb. 11)".

Similar videos of the Syrian helicopter crash by several other media outlets can be seen here and here.

AFP previously fact-checked the video after it went viral with the claim that it shows an Ethiopian military helicopter being shot down by Tigrayan rebels on November 11, 2021.