Skip to main content
US Border Patrol, National Guard and Texas Department of Public Safety vehicles in Del Rio, Texas shine their lights on migrants crossing the Rio Grande from Mexico to the United States on September 21, 2021 ( AFP / Paul Ratje)

An online article claims that the United Nations is handing out $800 debit cards to "illegal migrant families" heading to the United States from Mexico. But aid organization officials say the people pictured are not UN employees, the maximum financial assistance is less than half the amount stated, and the cards can only be used in Mexico.

"United Nations Is Handing Out $800 Debit Cards to Illegal Migrant Families in Mexico Heading to US," says the headline of a November 27, 2021 article by The Gateway Pundit, a website that has repeatedly made inaccurate claims that have been debunked by AFP Fact Check. 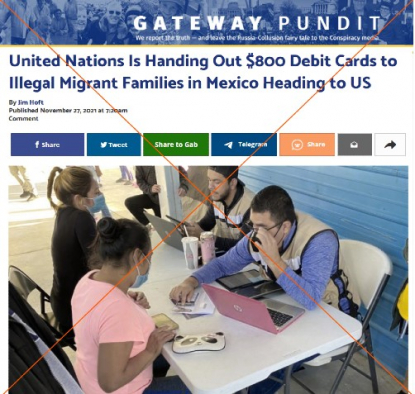 Screenshot of an online article taken on December 7, 2021

There has been an influx of migrants at the US border with Mexico in 2021, and President Joe Biden's administration has been under fire from both the right and the left for its immigration policy. AFP has fact checked a series of inaccurate claims about migration, including a similar one about the distribution of funds to migrants.

The Gateway Pundit article is based on tweets by Todd Bensman of the Center for Immigration Studies (CIS), which bills itself as a non-partisan "low-immigration, pro-immigrant" research organization. But the Southern Poverty Law Center civil rights nonprofit describes it as "the go-to think tank for the anti-immigrant movement."

Bensman, a CIS national security fellow, tweeted on November 20: "In Reynosa, Mexico, at a migrant camp, the United Nations IOM helpfully doles out debit cards to aspiring US border crossers. The IOM workers said a migrant family of four gets about $800 a month. I watched long lines of migrants get their UN debit cards."

The tweet included a series of photos, one of which appears to show a card being given to a woman. The image is also featured in The Gateway Pundit's article.

UN representatives told AFP that Bensman's description of what happened in Reynosa is wrong.

"The tweets by Todd Bensman do not represent IOM staff," said Safa Msehli, a UN crisis communications and advocacy spokesperson, referring to the International Organization for Migration. "The people who appear there are members of an IOM counterpart, staff of the Casa Migrante Nuestra Señora de Guadalupe."

IOM does provide aid to some migrants, but it cannot be used for the purchase of alcohol, tobacco, or in exchange for cash; consumption is monitored, and constant contact is maintained with beneficiaries, who receive individualized cards to prevent someone else from using them, Msehli said.

"Electronic purses" are given only to migrant individuals or families who fit a particular profile, including single caregivers, elderly people, pregnant women, families with a disabled member or children, victims of a crime in Mexico, or people who are working and renting on their own and looking to achieve greater self-sufficiency, she said.

Casa Migrante works with the UN but is unaffiliated with the organization and the IOM, said Alberto Cabezas Talavero, a IOM Mexico spokesperson.

No IOM staff were present at the event depicted in Bensman's tweet and The Gateway Pundit article, according to Cabezas Talavero.

He characterized the headline of The Gateway Pundit article as false for two reasons.

First, "IOM does not hand out debit cards, we hand out e-wallets which can be used to purchase certain items at certain locations and cannot be exchanged for cash," he said.

And second, "the maximum amount which can be delivered to a family through the e-wallets is approximately $395, depending on family size," not $800.

Miguel Gonzales, a staff member at Casa Migrante, told AFP that the organization was distributing aid -- financed by the IOM -- in Reynosa. Like Cabezas Talavero, he said the e-wallets are a temporary measure that provides monthly assistance worth far less than $800.

The cards also only work in Mexico, so if a beneficiary were to cross the border into the US, the cards would be useless, Gonzales said.

"The purpose of the cards is for recipients to be able to support themselves in Mexico. They do not serve as an incentive to cross the border illegally -- in fact the opposite. They make it easier for migrants to get by here in Mexico," he added.