Images shared thousands of times on Facebook claim that a popular Asian drink is made with goat droppings. This is false; the photo of the goat in the post has been digitally altered. Bubble tea contains tapioca pearls, otherwise known as boba. They have no relationship with animal faeces.

Images of bubble tea and a goat excreting into a milky drink have been shared multiple times on Facebook with the caption “SHEEP FAECES IS N0W BIG M0NEY…(sic)”.

One such post, archived here, goes on to claim that “sheep faeces is now in high demand in China because of it's richness in protein (sic)”. However, the accompanying image shows a goat, not a sheep. Furthermore, the picture has been doctored. 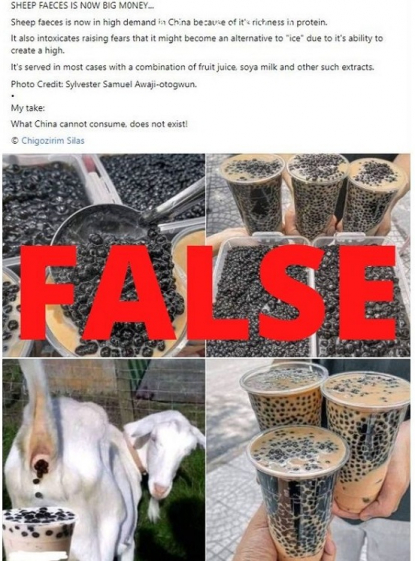 The same images have been shared elsewhere on Facebook and reported as fact by some blogs in Africa.

Images do not show animal droppings

By running reverse image searches, AFP Fact Check found that the round, black balls are not animal droppings as suggested on Facebook but rather made from tapioca. Three of the images were taken from a China Post article, which reported how bubble milk tea was being received in Taiwan.

According to the report, Taiwanese social media users have been debating if the drink looks appetizing or unappealing. 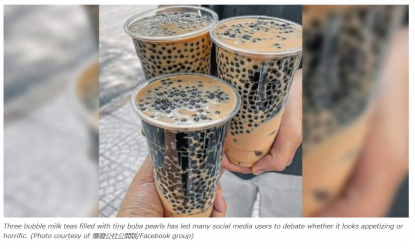 A screenshot taken on December 2, 2021, showing one of the images in the China Post article

The images have since gone viral on the internet.

The fourth image, showing a white goat relieving itself into a cup, has been altered to support the false claim. Multiple reverse image searches showed that the cup of bubble tea was added to the original image of a goat defecating in a farmyard. 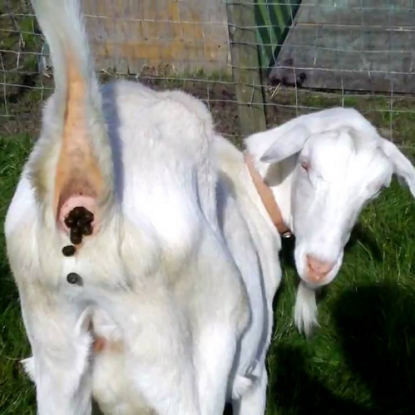 The earliest version of the original goat image we found was uploaded by Disease Research Limited (DRL) to its website in June 2018. According to its website, DRL is a laboratory working closely with New Zealand vets and farmers for the past 35 years to develop custom diagnostic tools to improve animal health and welfare.

The image has nothing to do with bubble tea. A detailed video of how tapioca pearls are made from starch can be seen here.

Bubble tea became popular in Taiwan and is gaining a following in the US as well.