Posts shared thousands of times on social media list three companies whose chief executive officers allegedly resigned on the first day of Ghislaine Maxwell's trial on sex trafficking charges. But only Twitter's CEO announced he was stepping down on November 29, 2021, while the leaders of Walmart and CNBC remain in their roles. 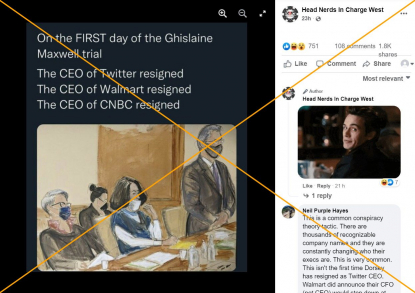 Maxwell was arrested in July 2020 and is now on trial, accused of procuring teenage girls for disgraced financier Jeffrey Epstein. She could spend the rest of her life in prison if she is convicted on all six counts of enticing and transporting minors for the purpose of sexual exploitation.

Her trial, which began on November 29, 2021, has been the subject of various inaccurate claims and speculation. The latest attempts to tie the resignation of several high-powered business leaders to the ongoing trial offer no evidence to support the connection. Below, AFP examines the situation at each company.

Twitter co-founder Jack Dorsey announced on November 29 he would be stepping down as CEO. In a letter to staff shared on Twitter, he said it was the right time for the company to "break away from its founding and founders."

not sure anyone has heard but,

AFP made repeated attempts to reach Twitter for  further comment but had not received a response at the time of publication.

Walmart President and CEO Doug McMillon remains at the head of the retailing giant.

"There is no truth to our CEO resigning, Doug remains our CEO," Randy Hargrove, a Walmart spokesman, told AFP on December 1.

On November 29, Walmart did announce a transition plan for its chief financial officer (CFO), but Brett Biggs, who has held the job for 22 years, will not be leaving the company until January 31, 2023.

Hargrove told AFP that the reorganization has nothing to do with Maxwell's trial and that the CFO "is moving on in his personal and professional life."

At CNBC, which has no CEO, chairman Mark Hoffman has made no announcement that he plans to resign, nor has Brian Roberts, the CEO of its parent company Comcast.

A CNBC spokesperson described the claim of a leadership change at the news channel as "categorically untrue."

Similar posts attempt to link other events, including some which were not true, to the opening of the trial, without offering any evidence. 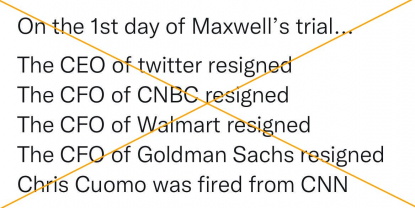 The CNBC network does not have a dedicated CFO, the spokesperson confirmed, and Comcast CFO Michael Cavanagh remains on the job.

No reports indicate that Goldman Sachs CEO David Solomon has resigned from his position; on September 14, the company announced the retirement of CFO Stephen Scherr, effective in January, who has been at the Wall Street giant since 1993.

CNN anchor Chris Cuomo was suspended indefinitely from CNN on November 30, but this was for advising his brother, governor Andrew Cuomo, during a sexual harassment scandal.

Another post mentions the resignation of New York's Chief medical examiner Dr. Barbara Sampson, suggesting that this is directly related to the Maxwell trial.

Julie Bolcer, a spokeswoman at the New York City Office of the Chief Medical Examiner, said that "there is no merit whatsoever to the claims."

"Dr Sampson actually announced her resignation internally to colleagues at OCME with a meeting and message on November 22, and our office shared the news more widely with media outlets on November 29," said Bolcer, adding that, "after more than 20 years, she has stepped down to begin a teaching and laboratories leadership position at Mt Sinai Hospital this week."