Social media posts suggest the lack of a livestream from Ghislaine Maxwell's trial is part of a cover up designed to limit public scrutiny. But the claim is misleading; a federal rule bans cameras and recording devices from trials at the New York court hearing Maxwell's case on sex trafficking charges that stem from her relationship with Jeffrey Epstein.

"Ghislaine Maxwell's trial started today. She's only the accomplice of Jeffrey Epstein and a Global Human Sex Trafficking Ring; and yet all the public gets... is a sketch. Ghislaine's trial should be the one live streamed for the world to see!" says a November 20, 2021 Instagram post. 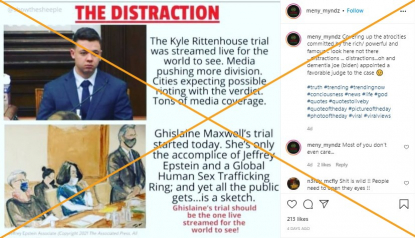 It compares the federal trial of the United States v. Ghislaine Maxwell to the state trial of Kyle Rittenhouse, some suggesting the lack of cameras is part of a larger conspiracy. Epstein, a convicted sex offender whose death in prison was ruled a suicide, is frequently mentioned in QAnon posts about a global pedophile ring said to include celebrities, business people and politicians. Epstein was awaiting trial when he died in August 2020.

Maxwell, daughter of late media tycoon Robert Maxwell, was arrested in the United States on July 2, 2020. She was charged with sex trafficking minors for Epstein, her former boyfriend. After pleading not guilty to the charges, Maxwell was denied bail several times and has remained in custody. Her trial is set for November 29, 2021.

Rittenhouse, an American teenager who shot dead two men during protests and riots against police brutality in Wisconsin, was acquitted of all charges after a politically divisive trial that was live-streamed and televised by several news outlets.

But camera access rules differ only because of the courts where the trials are taking place. According to the United States Courts website, Federal Rule of Criminal Procedure 53 states: "[E]xcept as otherwise provided by a statute or these rules, the court must not permit the taking of photographs in the courtroom during judicial proceedings or the broadcasting of judicial proceedings from the courtroom."

In contrast, cameras have been allowed in Wisconsin, at the judge's discretion, since 1979. The Rittenhouse trial was held in Wisconsin state court and Kenosha County Circuit Judge Bruce Schroeder allowed cameras to be present.

"The Rittenhouse trial was televised because Kyle Rittenhouse was tried in a state court in Wisconsin, where there is a presumption in favor of televised trials of all types, whereas the Maxwell trial will not be televised because there is a flat prohibition against televising federal criminal trials," Kevin Goldberg, a First Amendment Specialist at the Freedom Forum Institute told AFP on November 23, 2021.

Goldberg said that "the Judicial Conference of the United States oversees the use of cameras in civil cases in federal courts," and very few allow video of court proceedings and only "under certain, limited circumstances."

The jury selection process for the Maxwell trial is under way. The courtroom is open to both the public and the press, including sketch artists.

The courtroom sketch featured in the posts was distributed by the Associated Press. The image, drawn by Elizabeth Williams, shows Maxwell on November 1, when she was brought into a Manhattan courtroom for a hearing.