An image of two SUVs surrounded by soldiers has been shared on Facebook in Ethiopia alongside a claim that it shows Ethiopian Prime Minister Abiy Ahmed headed towards the war front in the country’s north. This post surfaced as the Ethiopian leader announced that he would join troops on the frontline. While Abiy has indeed headed to the front, the photo is old and shows Abiy’s return from Oslo, Norway after receiving the Nobel Peace Prize in 2019.

The image was posted on a popular Facebook account called “Yehabesha” (meaning “of Ethiopia”), which is followed by nearly two million people and mainly posts news from various outlets. The post was shared more than 190 times and generated more than 6,000 likes since it was published on November 23, 2021.

The image shows two black SUVs, heavily guarded by soldiers in uniform, driving under what seems to be an overpass. A large crowd on both sides of the motorcade appears to be cheering the vehicles.

Written in Amharic, the post’s caption translates to: “As he promised, the Nobel Peace Prize winner Prime Minister Abiy Ahmed has started heading to the front in a V8”. 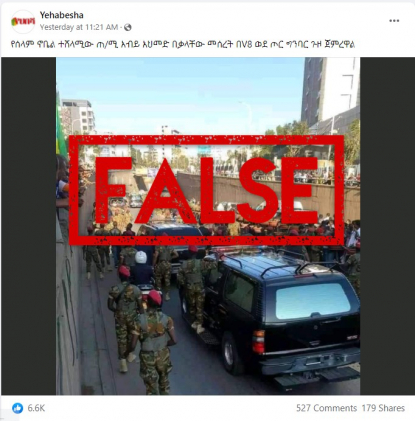 Screenshot of the misleading claim shared on Facebook, taken on November 24, 2021

The post surfaced as Abiy announced he would leave the capital and head to the frontline to lead soldiers battling rebels, as the year-long conflict moves closer to the Ethiopian capital Addis Ababa.

The war in Ethiopia broke out in November 2020, after Abiy sent troops into the country's northernmost Tigray region to topple the Tigray People’s Liberation Front (TPLF) -- a move he said came in response to TPLF attacks on army camps.

The fighting has killed thousands, displaced more than two million and driven hundreds of thousands into famine-like conditions, according to the UN.

“Starting tomorrow, I will mobilise to the front to lead the defence forces," Abiy said in a statement posted on Twitter on November 22, 2021. "Those who want to be among the Ethiopian children who will be hailed by history, rise up for your country today. Let's meet at the front”.

Abiy did head to the front on November 23, 2021, and returned to the Ethiopian capital nearly a week later. Upon his return, he held a press conference and urged rebels to surrender, claiming government forces were nearing victory.

Videos of the Ethiopian leader on the battlefield were released soon after by the Ethiopian Broadcasting Corporation and were published on the prime minister’s official Facebook page on November 27, 2021.

However, the claim that the image shows Abiy’s vehicles headed to the war front is false.

"I hope we will celebrate my noble prize together with president Esaya Afoworki in the near future. P.M Abiy Ahmed," the Tigrinya caption translates to English. 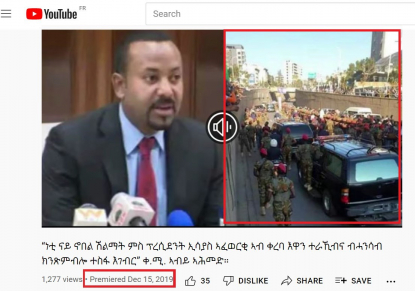 A picture taken on December 12, 2019, by the Turkish news agency Anadolu and published on the website of Getty Images shows the motorcade arriving under the overpass. Similar details, such as the soldiers standing on the SUVs as well as the crowd of onlookers are visible in both shots.

According to the caption, the image shows Ethiopia's prime minister returning to Addis Ababa on December 12, 2019 -- which coincides with Abiy’s return from Oslo after accepting the Nobel Peace Prize as reported by local media Addis Standard.