Facebook posts claiming that Uganda’s main airport in Entebbe has been rebranded following a takeover by the Chinese government have been shared multiple times online. They include an image of the airport entrance with a banner overhead saying “Welcome to China Ebb International Airport” alongside China’s flag. However, the claim is false; this is an AFP photo that was digitally manipulated to give the impression it was seized by China.

On November 29, 2021, a Facebook page with more than 230,000 followers shared a screenshot of an article on NewsDay, a local news blog, headlined: “Picture of the day: China rebrands Entebe (Entebbe) airport (sic)” and featuring a picture showing the airport’s purported change of name. 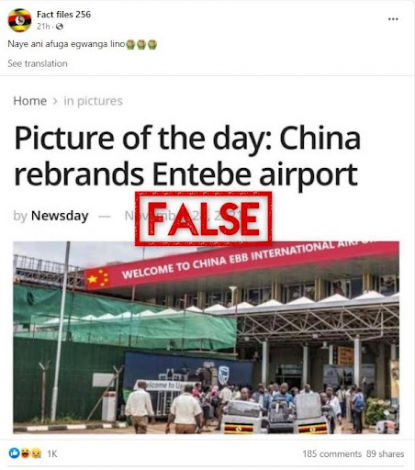 The same claim has been shared on Facebook here, here and here.

The image circulated online following local reports last week that Uganda could surrender Entebbe International Airport should it default on a 2015 loan from Beijing to expand and upgrade the facility.

However, the picture has been digitally manipulated to include the Chinese references in the banner.

A reverse image search reveals the original picture was taken by an AFP photographer on March 3, 2020, and featured in news reports here and here. The sign reads: “Welcome to Entebbe International Airport”, without any flag.

On December 1, 2021, an AFP photographer took a fresh picture of the airport. There was no evidence of any rebranding. 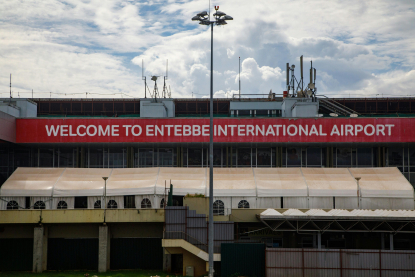 NewsDay has since deleted its erroneous article and issued a correction, but the screenshot with the digitally altered image continues to circulate online.

While details of the loan agreement between China and Uganda are not public, both governments have denied the rumours.

As reported by AFP, a spokesman for the Chinese embassy in Kampala on November 28, 2021, said: “The malicious allegation ... has no factual basis and is ill-intended to distort the good relations that China enjoys with developing countries including Uganda.”

“Not a single project in Africa has ever been confiscated by China because of failing to pay Chinese loans,” the embassy spokesman said.

In a statement on November 26, 2021, Uganda’s Civil Aviation Authority had also denied the rumour, saying the government could not surrender a national asset.

“We have said it before and repeat that it has not happened, and is not going to happen.”