A video has been viewed more than half a million times in multiple YouTube, Facebook, TikTok and Instagram posts alongside a claim it shows a "lightning ball" crossing railway tracks. However, the claim is false. Belarus-based 3D artist Andrei Trukhonovets told AFP that he created the video and uploaded it on YouTube in May 2019.

This one-minute and 50-second video was published on YouTube on November 9, 2021.

It is titled: "The Phenomenon of a Mysterious Lightning Ball Crossing the Railroad Tracks Went Viral."

The post's Indonesian-language caption translates in part as: "A video of a 'lightning ball' crossing the railway tracks has gone viral on social media. The light can be seen sparking fire as it approaches the power pole. The video was uploaded by the Instagram account @fakta.indo, Monday, November 8, 2021. #VIVAnewsdaily". 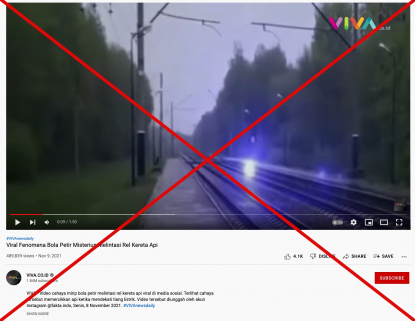 The superimposed text on this video reads: "The uploader explained that this light is known as a ball of lightning, an electrical phenomenon that has the potential to explode.

"The uploader continued, the term refers to reports of luminous and spherical objects that vary from the size of a pea to several metres in diameter.

"The uploader also advised moving away immediately if anyone sees a light like this.

"However, in the viral video, the time and place of the incident are not yet known."

It was published on a YouTube channel under the name Andrei Trukhonovets on May 27, 2019.

In the misleading posts, the genuine video has been reversed.

Below is a screenshot comparison of the video in the misleading post (L) and the mirrored version of the genuine clip (R), with matching features circled in red by AFP:

Trukhonovets, a Belarus-based 3D artist, told AFP that he created the video using the video-editing software Adobe After Effects and uploaded it to YouTube in May 2019.

He said he filmed the clip of railway tracks seen in the video near the Belarusian capital of Minsk.

"I tried to create a short story with a ball of lightning, imagined how it would have moved and behaved," Trukhonovets said on December 1, 2021. "Then I recorded a video with railways, imagining there's a moving ball of lightning on it."