Two videos have been shared thousands of times on Facebook alongside a claim that it shows robbers waiting to snatch people's belongings outside a mall in Malaysia. However, the claim is false. The first video shows a simulated robbery that was staged by Malaysian police for a public awareness campaign, while the second video shows a robbery in Brazil.

The first video was published on Facebook here on November 22, 2021.

The 35-second video shows motorcycles waiting by the roadside then suddenly charging toward a woman with a handbag.

The text superimposed on the video states: “In JB snatch thieves waiting outside Square Mall”. 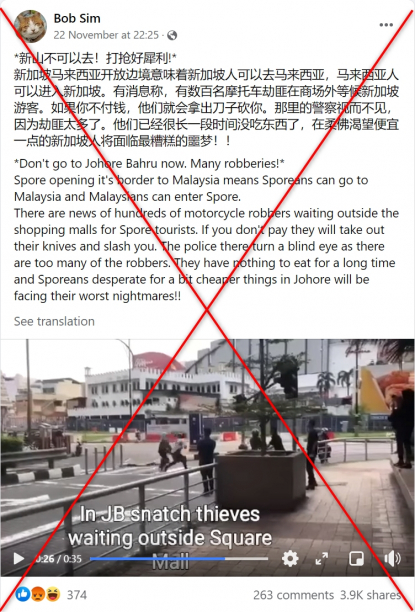 “Spore opening it's border to Malaysia means Sporeans can go to Malaysia and Malaysians can enter Spore.

“There are news of hundreds of motorcycle robbers waiting outside the shopping malls for Spore tourists. If you don't pay they will take out their knives and slash you. The police there turn a blind eye as there are too many of the robbers. They have nothing to eat for a long time and Sporeans desperate for a bit cheaper things in Johore will be facing their worst nightmares!!”.

The same caption is also written in Chinese.

This video was posted days before Singapore and Malaysia eased pandemic travel restrictions on November 29, 2021, allowing some vaccinated people to cross the borders without quarantine, as reported by AFP here.

The same video was posted with a similar claim on Facebook here and here.

A different video was also shared with a similar claim on Facebook here on November 25, 2021. 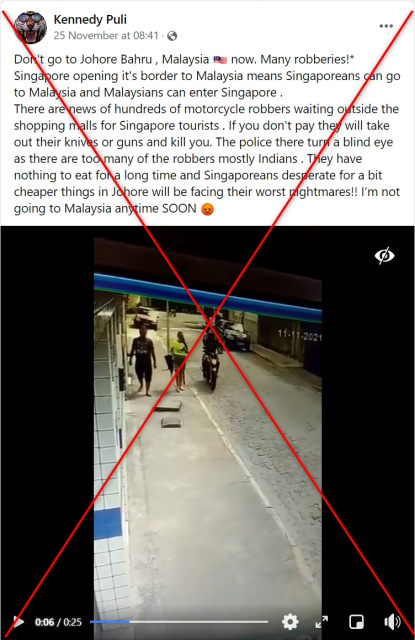 Screenshot of the second misleading post, taken on November 30, 2021

From the 0:36 to the 1:38 mark, the Johor Bahru South police's video shows the same scenes shown in the misleading post.

Below are screenshot comparisons of the video in the misleading post (L) and the police’s video (R) – AFP has circled some similar features in red and green: 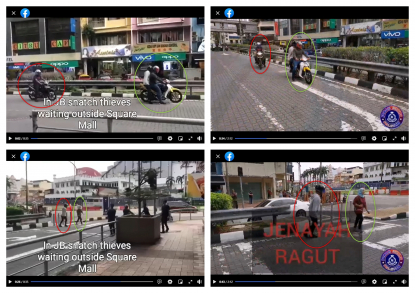 In the misleading video, from the 0:13 to 0:16 mark, a man’s voice can be heard counting down in Malay and saying, "Action!" which then prompts the motorcycles to move.

AFP Fact Check previously debunked a false claim about a robbery in Johor Bahru using a different video showing the shooting of the PSA video.

The title of the news report states: “Camera catches mugging with death in Recife and residents are afraid and feel insecure".

Recife is the capital of Brazil’s northeastern state of Pernambuco.

Below is a screenshot comparison of the video in the misleading post (L) and the TV Globo footage (R):

According to this article published by local newspaper Jornal do Commercio on November 12, 2021, the victim's name was Pedro Henrique, a university student who was robbed and killed on Rua Antonio Lucena in Recife.

The title of the Portuguese article reads: "Video shows the moment in which the university student is killed in an assault at Madalena, western zone of Recife."

The first two paragraphs states: "The death of university student Pedro Henrique Goncalves, 24 years old, during an assault in Madalena, west zone of Recife, brought to light feelings that have long prevailed in the minds of residents of the neighborhood: that of fear and insecurity. Pedro Henrique was the victim of a robbery in the plain light of day, around 13:30, at the Rua Antonio Lucena.

"During the incident, the student reacted to the assault and tried to grab the suspect's gun. He was shot soon after and died at the scene of the crime, in front of his sister. Images from surveillance footage show the exact moment in which the larceny, a theft followed by murder, occurred."

In a statement published on Facebook on November 24, 2021, the Johor police chief, Ayob Khan Mydin Pitchay, said the claim shared in the social media posts is "false".