Kyle Rittenhouse's acquittal led social media users to share a video claiming to show patrons of a crowded bar erupt in celebration as a large screen showed the jury's verdict clearing him on all counts. But the content is a doctored video whose original version showed soccer fans in England reacting to a goal in 2016, and has been altered in many other contexts since.

"This was how many people across the world today reacted watching the verdict come in in the Rittenhouse case," wrote one Facebook user on November 19, 2021 as the caption to the video.

Just above two English flags, the video shows 18 year-old Rittenhouse breaking down on November 19, as he was acquitted for shooting dead two men during protests and riots against police brutality in Wisconsin last year. The crowd instantly breaks out in exuberant joy, jumping around and splashing beer. 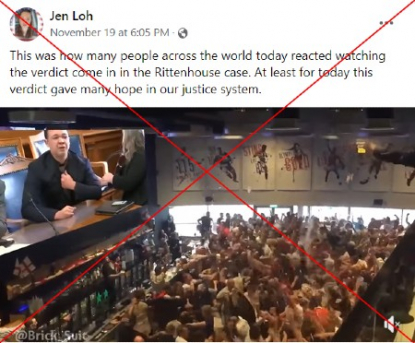 While the crowd's reaction seems a strong response to a justice decision that came in the middle of the day, some who watched the video appear to have taken it seriously.

The original version of the video was posted on Twitter by user @Brick_Suit (whose watermark is visible at the bottom left of the video) on November 19.

One person commented: "Where is this? Planning my next vacation." Another wrote: "Celebrating while two people are dead. This is why people call you deplorable."

However, the video is a known montage in which the original footage on the screen was substituted for the Rittenhouse verdict.

The original poster did not attempt to hide this fact, responding to one person who enquired about the origin of the video: "It's a meme. Original scene is of a crowd watching a soccer game when a goal scored."

The original video was taken during a game in Bristol's Ashton Gate Stadium on June 17, 2016, when England was playing Wales in the European Championship, and at that specific moment fans were reacting to a goal by England's Daniel Sturridge, which secured victory.

Photos posted on the stadium's Instagram account in the past show the same space during other games.

The video of the exultant fans has often been altered to show other videos for comedic purposes, such as a DVD player screensaver or the Games of Thrones finale.

AFP Fact Check debunked versions of the altered video in the past, including ones featuring a basketball game in Toronto in 2019, and US President Joe Biden tripping on stairs in March 2021.