A Facebook post claiming to show a meeting between Ethiopia’s last emperor, Haile Selassie, and Jamaican reggae singer Bob Marley has been shared multiple times online. The claim is false: although the image was captured during Selassie’s visit to Jamaica on April 21, 1966, the photographer who took the shot described the men meeting the Ethiopian leader as “unidentified dignitaries”. Additionally, historical accounts indicate that Bob Marley was in the United States at the time.

On November 13, 2021, a Facebook user shared a photograph of Selassie in the company of three men, including one with dreadlocks.

“Selassie I and Bob Marley,” reads the post, which was shared more than 80 times. 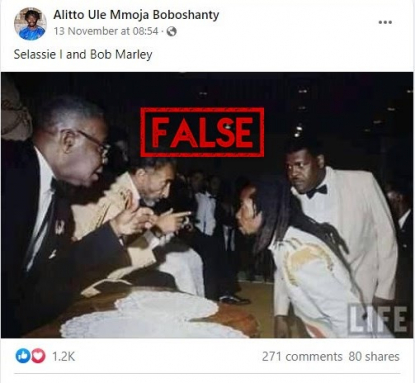 A reverse image search locates the picture in the online archives of LIFE magazine, which can be viewed through stock photography website Shutterstock.  It is attributed to photographer Lynn Pelham, who worked for LIFE magazine and other US news outlets.

A screenshot of the photo on Shutterstock’s website, taken on November 16, 2021

Additionally, a historical account by prominent reggae historian David Katz indicates that Marley was in the US state of Delaware during Selassie’s visit to Jamaica.

Katz explains that Marley’s wife, Rita, was among thousands of Jamaicans who thronged the streets to witness Selassie’s visit on April 21, 1966. After sighting the emperor, Katz says that she converted to the Rastafarian faith and recounted her experience in a letter to her husband, who was in Delaware.

Furthermore, in the documentary “Marley”, by Scottish director Kevin Macdonald,  Rita Marley confirmed that the singer moved to Delaware on February 12, 1966, a day after their February 11 wedding.

Pictures from the wedding also show that he did not have dreadlocks at the time. 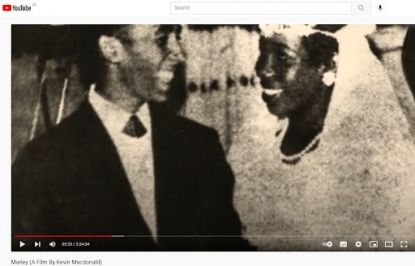 A screenshot of Marley documentary, taken on November 16, 2021

Selassie, who died in 1975, is revered by Rastafarians as a messiah. While Marley referred to him several times in his music, there is no official evidence the two ever met.