Skip to main content
A man receives a Covid-19 vaccine in the suburb of Cabramatta in Sydney on August 17, 2021. ( AFP / Saeed KHAN)

An article circulating on Facebook claims Covid-19 vaccines have killed more people in Australia in 2021 than the disease itself, citing figures from the national drug regulator. The claim is misleading; the regulator's database shows adverse reactions reported following vaccination but does not mean they were caused by the jab. There have been significantly fewer confirmed deaths from Covid-19 vaccination than from Covid-19 in Australia in 2021.

"More Australians have died due to the Covid-19 Vaccines than have died of Covid-19 in 2021 according to official data," reads the headline of an article posted on Facebook on November 14.

The article was published on November 10 by The Exposé, a UK-based website that describes itself as an alternative to mainstream media. 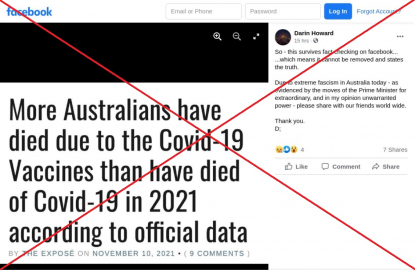 The article claims: "Official data made public by the Australian Government shows that by mid October 2021, Australia had officially suffered more deaths due to the Covid-19 vaccines than the disease they were supposed to be protecting against."

It cites figures from the Database of Adverse Event Notifications (DAEN), which is run by Australia's drug regulator, the Therapeutic Goods Administration (TGA). Reports of adverse events can be added to the database by consumers, health professionals and members of the medical industry.

"This means that between 21st February 2021 and October 14th 2021, fifteen more people had actually died due to the Covid-19 vaccines than had died of the alleged disease the vaccines are supposed to protect people against," it says.

The same article was shared in Facebook posts in various languages, including English, French, Italian and Vietnamese.

The article erroneously takes the DAEN's count of deaths reported after Covid-19 vaccination as deaths directly linked to the jab.

A disclaimer on the database's website states: "An adverse event report does not mean that the medicine is the cause of the adverse event".

A TGA spokesperson told AFP in September that: "Reports are published in the DAEN irrespective of whether the adverse event is assessed by the TGA to be related to the vaccination."

The number of deaths reported in Australia after Covid-19 vaccination stood at 606 as of October 14, according to the DAEN accessed by AFP on November 19.

However, the number of deaths linked to Covid-19 vaccination is much lower.

"So far, the TGA has found 9 reports of death that were linked to immunisation from 597 reports received and reviewed. The overwhelming majority of deaths reported to the TGA following vaccination occurred in people aged 65 years and older," it said.

"The deaths linked to immunisation occurred after the first dose of Vaxzevria (AstraZeneca) – 8 were TTS cases and one was a case of immune thrombocytopenia (ITP)."

Since the start of the pandemic, Australia has recorded more than 1,940 Covid-19 deaths, as of November 21.

Australia was initially effective in controlling the spread in of the virus, but saw a spike in Covid-19 cases following an outbreak of the Delta variant in June 2021, coupled with the sluggish uptake in vaccinations.