Facebook posts in South Korea purport to show a news article praising President Moon Jae-in's performance during a visit to Europe in November to attend the G20 and COP26 summits, showing a photo of the leader stood alone in the centre of a crowded room. However, the screenshot of the news report is doctored to combine text and a photo from two separate articles.

The misleading screenshot was shared here on Facebook on November 8, 2021.

"Visit to Europe. Reputation raised. The next president will have big shoes to fill, says Blue House," reads the Korean-language headline of a purported news article shared on Facebook on November 8.

The Blue House is the South Korean president's official residence in the capital Seoul.

The headline is followed by the subheading: "The president who stood on his own feet as a world leader, says Associated News".

The purported report shows a photo of South Korean President Moon Jae-in stood in the middle of a room, surrounded by people. Moon visited Europe in November to attend the G20 summit in Rome and the COP26 climate conference in Glasgow. 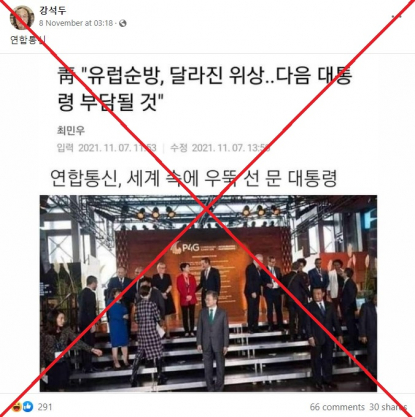 The same screenshot of the purported report circulated on Facebook here, here, here and here.

However, the image has been doctored to include a subheading and an old photo of Moon.

Keyword searches found the headline was taken from an article from November 7 in South Korean daily Kookmin Ilbo, which reported on the leader's trip to Europe.

The subheading in the purported news report -- which reads: "The president who stood on his own feet as a world leader, says Associated News" -- does not feature in Kookmin Ilbo's article.

Below is a screenshot comparison between the doctored report (L) and the original report (R).

Screenshot comparison between the doctored report (L) and the original report (R).

According to the website, the photo was taken on October 20, 2018 in Denmark.

"Moon Jae-in President of South Korea waiting for a family picture during the P4G Copenhagen Summit 2018 at The Danish Radio Concert Hall," the photo caption reads.

Below is a screenshot comparison of the photo used in the doctored report (left) and the 2018 photo on Alamy (right).

Screenshot comparison between the photo in the doctored report (L) and the 2018 photo published by Alamy (R).