Facebook users have shared an image of South Korean President Moon Jae-in purportedly showing him holding a satirical painting of the country’s former president Park Geun-hye. The image, however, has been doctored. The original photo shows Moon holding up a party membership application for former South Korean lawmaker Pyo Chang-won. 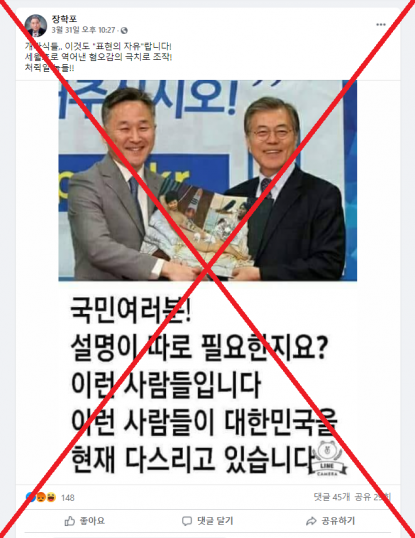 The post’s Korean-language caption translates to English as: “Bastards. They created this [painting] with hatred spurred by the Sewol ferry incident. They call it ‘freedom of expression.’ ”

The Sewol ferry sunk in April 2014, a disaster that killed 300 people and dealt a crippling blow to then-president Park Geun-Hye, AFP has reported here.

The claim was shared alongside an image that shows Moon and Pyo holding up a painting, which appears to depict former president Park.

The Korean-language text superimposed on the image reads: “Fellow citizens! Do we need further explanation? This is what they are. These people are currently ruling the Republic of Korea.”

The painting seen in the misleading Facebook post is a satirical painting titled “Dirty Sleep” that depicts Park in the nude, as seen here on the website of Yonhap News Agency.

The painting was displayed at an art exhibition hosted by Pyo and South Korea’s National Assembly from January 20 to 24, 2017. It was controversial among Park supporters, women’s rights advocates and free speech activists, according to this report by Seoul-based online newspaper OhmyNews published on January 24, 2017.

Comments under the Facebook posts suggested some users believed the photograph was genuine.

One user wrote: “Bastards should be killed with a knife.” Another wrote: “Look how they laugh with their mouths open.

“For this act they will all need to pay with their lives,” wrote a third user.

Identical image and similar claims have been shared on Facebook here, here, here and here.

A reverse image search on Google found the original photo published here, by South Korean news agency News1 on December 27, 2015. It was published before Moon was elected as president on May 9, 2017.

The caption of the photo reads: “Moon Jae-in, chairman of the New Politics Alliance for Democracy(right), receives a party membership application form from Institute of Criminal Science Chairman Pyo Chang-won (former Korean National Police University professor), at the party chairman’s conference room at the National Assembly in Yeouido, Seoul, on the 27th. Moon picked Pyo as the first outside figure invited to the party for the 20th general election.”

Below is a screenshot comparison between the photo shared in the misleading Facebook post (L) and the original image published by News1 (R).

Screenshot comparison between the photo shared in the misleading Facebook post (L) and the original image published by News1 (R).

A clip published on December 27, 2015 on South Korean broadcaster YTN’s YouTube channel shows the same scene where Moon and Pyo pose for the picture. 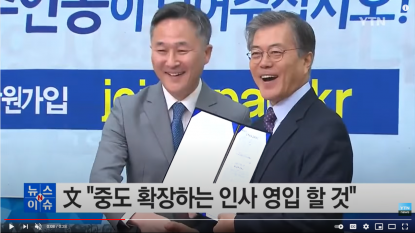 Screenshot of recorded clip published by YTN, captured on April 5, 2021.

Images of Moon and Pyo holding up a party membership application can be seen in other reports by South Korean media outlets, including Hankyoreh and Newsis.