This footage shows a burning building in Ethiopia's capital Addis Ababa, not in Mekelle

A video of a building engulfed in flames has been widely shared on Facebook in Ethiopia with claims that the footage was captured in Mekelle, the capital city of Tigray region. The post surfaced not long after the federal government conducted airstrikes in Tigray, suggesting that the fire was caused by an act of war. However, the claim is false: the footage shows a building in the country’s capital Addis Ababa and the cause of the fire was unrelated to the Tigray conflict.

The video was posted on a Facebook page called “EBC Ethiopia'' and has been viewed nearly 400,000 times since it was published on November 2, 2021. It was shared nearly 1,000 times and has racked up more than 8,000 likes and generated nearly 700 comments.

The footage shows a building on fire and firefighters attempting to contain the flames as the blaze spreads to the adjacent building.

“Mekele is burning”, the post’s caption reads in Oromifa, the language spoken in the country’s Oromo region. 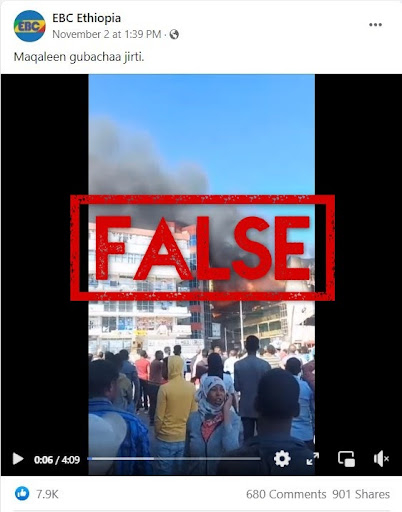 A year after civil conflict erupted in Ethiopia, the Tigray People's Liberation Front (TPLF) rebel group announced on November 3, 2021, that it had reached the town of Kemissie in the Amhara region, about 325 kilometres (200 miles) northeast of the country’s capital Addis Ababa.

As rebel troops have advanced, Ethiopian National Defence Forces (ENDF) have conducted airstrikes in parts of the country, including Mekelle.

However, AFP Fact Check found that the claim that the burning building is in Mekelle is false.

The first hint that this video was not filmed in Mekelle is in the audio: the Amharic language is heard throughout the footage, which makes it unlikely that it was shot in Mekelle, where Tigrigna is spoken.

AFP Fact Check ran a reverse image search on frames from the footage and traced it back to other videos on YouTube showing the same footage, including a news report of the incident by local broadcaster Addis Media Network (AMN). Unlike the claim made on Facebook, all of the videos mention that the fire happened in Addis Ababa.

According to local authorities, the blaze started on the third floor of the Emanuel Tsega building located in the busy neighbourhood of Merkato in the heart of Addis Ababa.

The Mesalemia branch fire brigade told AFP Fact Check that they received a call around 2:40 pm after the fire started in a shoe store that stocked flammable products. According to news reports, no one was severely injured, however, 12 people were taken to the hospital to check minor injuries.

“We used 17 trucks to stop the fire”, a firefighter says in AMN’s report.

AFP Fact Check photographed the burned-out building in Addis Ababa to show that it matches the footage.

The Facebook page “EBC Ethiopia”, which posted the false claim, is not the real account of the Ethiopian Broadcasting Corporation (EBC). The authentic page can be found here.

This is not the first time that this copycat page has published misleading information. AFP Fact Check previously debunked an image shared by the page with claims that it showed the arrest of the Tigrayan leader Debretsion Gebremichael.