Leader of Tigray People’s Liberation Front is not in custody, this image was doctored

An image of a man in handcuffs with two soldiers on either side of him has been shared on social media in Ethiopia with claims that the photo shows the arrest of Debretsion Gebremicheal, leader of the Tigray People’s Liberation Front. Debretsion has been at large since the start of Ethiopia’s conflict in the northern region of Tigray in November 2020. But the claim is false: the image was doctored and shared on a Facebook account posing as the Ethiopian Broadcasting Corporation. Furthermore, an army spokesman told AFP Fact Check that no arrest has occurred.

The image was published on Facebook on October 17, 2021, during an Ethiopian army military offensive in northern Ethiopia. The post has since been shared more than 100 times.

“The biggest leader of the junta, Debretsion, has been caught. Got him (sic),” reads the post’s Oromifa caption. 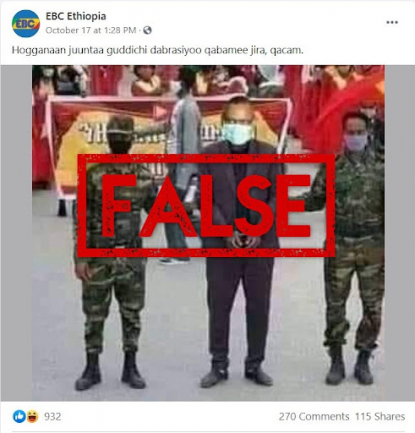 The Facebook post surfaced as the Ethiopian government launched a new air strike on the Tigrayan capital, Mekele, on October 20, 2021; this marks the second round of recent bombardments against TPLF targets in the city. In late June 2021, TPLF regrouped and has retaken most of the region, including Mekele. 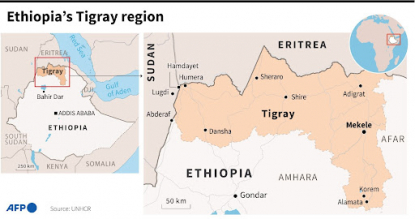 However, the claim that Debretsion was recently captured is false.

Contacted by AFP Fact Check, an army spokesman confirmed that Debretsion remains at large and dismissed the claim of his arrest as “fake news”.

“The photo is also clearly a fake,” he said.

The government said the latest strike on Mekele was aimed at destroying weapons caches. No arrests of high-ranking officials were announced.

AFP Fact Check was unable to find any reports on the capture of Debretsion either in local or foreign media.

Furthermore, the same doctored image has circulated online for almost a year.

By running a reverse image search, AFP Fact Check traced the image to a Facebook post published on November 18, 2020, soon after the conflict in Tigray began. 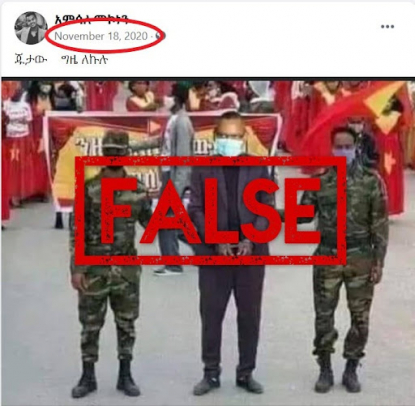 A screenshot taken on October 20, 2021, showing the same false claim published on Facebook in 2020

By running another reverse image search we were able to find a similar image published on Twitter on January 9, 2021. In this image, however, the man in the middle has a different face and is looking in another direction.

The user who shared the image on Twitter told AFP Fact Check that the man in the photograph was “an actor playing PM Abiy Ahmed in Mekele stadium”, adding it was a propaganda spectacle. “This was before the war when TPLF was busy with different provocative military parades,” he said, although AFP Fact Check has not been able to verify this. 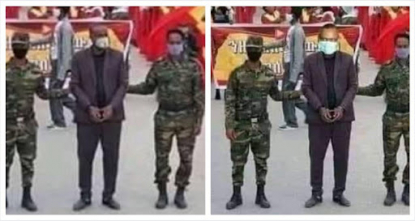 Furthermore, the page that posted the doctored image of Debretsion on Facebook on October 17, 2021, is not the genuine Ethiopian Broadcasting Corporation (EBC) page, which was hacked during the second inauguration of Ethiopian Prime Minister Abiy Ahmed on October 4, 2021.

On the same day the Ethiopian News Agency warned that information “via the social media of EBC should not be considered as facts disseminated from the corporation”.

Although government authorities reported that they had restored the hacked page, it remains offline as of October 21, 2021.