A video has been viewed more than 1.7 million times in multiple social media posts that claim it shows Prince Charles "praising" Indonesian President Joko Widodo for "his hard work to restore nature" at the G20 summit in Rome in October 2021. The claim is misleading. In his speech, Prince Charles only mentioned the Indonesian leader to wish him "every possible success" for taking over the G20 presidency from Italy. It was Italian Prime Minister Mario Draghi that the Prince of Wales thanked for his work on climate change while leading the G20 in the past year.

Translated to English, the Indonesian-language subtitles on the clip read: "PRINCE CHARLES the crown prince of the united kingdom Praised JOKO WIDODO in front of all world leaders 31/10/2021.

"'This is why I also put hope on all the success of President Widodo.' 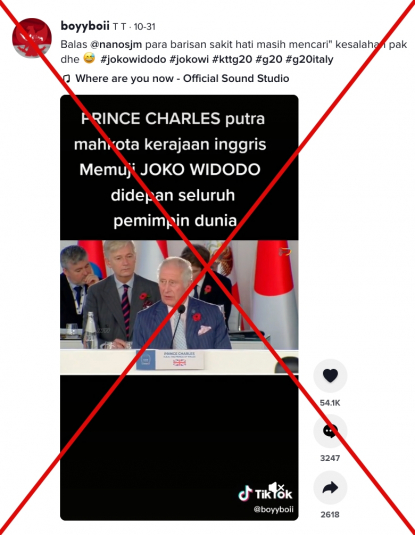 The subtitles continue: "Prince Charles the British Crown Prince see Efforts to Save the Planet from Climate Change Disasters are Very Costly.

"Indonesia is very Vital For the Recovery of the World's climate Because it has the largest Mangrove Forests and enormous Tropical Forests.

"According to Prince Charles there is no single Government who Can Save the Planet alone."

The clip has received more than 1.1 million views after it was shared with a similar claim on TikTok here; on Twitter here, here, here, and here; on YouTube here and here; and on Facebook here.

A Google keyword search found the genuine video was posted on October 31, 2021, here on The Royal Family Channel on YouTube.

The post is titled "Prince Charles' Speech at G20 Summit: 'The Future of Humanity is at Stake'."

The video's caption partly says: "Charles received a rare invitation to join 20 of the world's most powerful leaders, as a long-standing campaigner for environmental causes."

The clip, which is six minutes and 55 seconds long, shows Prince Charles speaking at the G20 summit in the Italian capital of Rome.

The segment shown in the misleading video matches the 3:10-3:33 mark of the genuine video.

"That is why, Prime Minister, I'm so grateful to you for recognising the central truth and for bringing them in, giving them a seat at this most important table so the climate change can be tackled in partnership," the Prince of Wales said.

"Which is why I also wish President Widodo every possible success when you pass the baton to him in a month's time," he added.

Prince Charles didn't mention the Indonesian president in the rest of his speech.

Indonesia is taking over the presidency of the grouping from Italy and is set to host the G20 summit in 2022 on the island province of Bali.

Below is a screenshot comparison of the video in the misleading post (L) and the genuine video from The Royal Family Channel (R):

The full text of Prince Charles' speech, published here on the website of the Prince of Wales and the Duchess of Cornwall, also matches with the words he spoke in the full video.

AFP has previously debunked another false claim related to Jokowi's attendance at the G20 summit in Rome here.