A video has been viewed tens of thousands of times in multiple social media posts that claim it shows Indonesia's President Joko Widodo at the 2021 G20 summit in the Italian capital of Rome. The posts claim he became the "central figure" at the summit. The claim is false. In fact, the video shows the Indonesian president at the G20 summit in 2019, when the Japanese city of Osaka hosted the event. 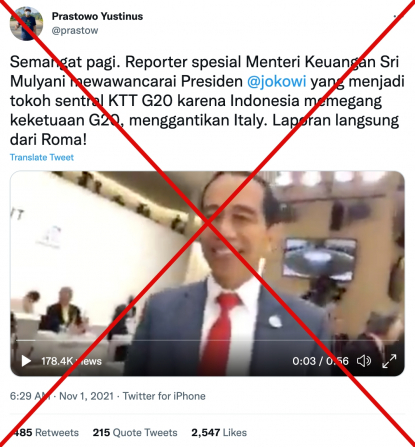 Jokowi attended the G20 Summit in Rome in late October 2021, where Indonesia officially assumed the presidency of the grouping.

Indonesia is set to host the G20 summit in 2022 on the island province of Bali.

Translated to English, the first three paragraphs of the video's caption says: "The second day the leaders of the G20 summit discussed Inequalities and Realizing Inclusive and Sustainable World.

"I took the time to vlog with Indonesian President Joko Widodo @jokowi.

"Apart from that, we also discussed the importance of Women Empowerment."

Below is a screenshot comparison of the video in the misleading post (L) and the genuine video from 2019 (R), with the event's name circled in red by AFP:

Indonesian media outlets, including Liputan 6 here and Suara Karya here, reported that the video was filmed in Osaka in 2019.