Two images of troops wearing combat uniforms have been shared on Facebook in Ethiopia alongside a claim that they show Tigray rebels fighting Eritrean soldiers in an Ethiopian border town on November 1, 2021. But the claim is false: the first photo shows Saudi Arabian soldiers keeping watch along the country’s border with Yemen in 2010. Although AFP Fact Check was unable to verify the source of the second image, it has circulated on social media at least since March 2021.

The post containing the images was published on Facebook on November 1, 2021, and has since been shared more than 50 times. 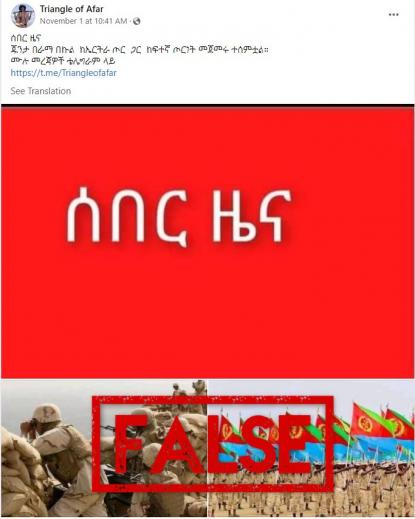 Written in Amharic, the caption translates to: “Breaking news: the junta is engaging in a heavy war with Eritrean soldiers along the Rama route.”

Fierce fighting between government troops and Tigray rebels was reported 375 kilometres (235 miles) north of the Ethiopian capital Addis Ababa on November 1, 2021, prompting Prime Minister Abiy Ahmed to urge his countrymen to unite and join the fight.

AFP reported that much of northern Ethiopia, including Rama town, was under a communications blackout. Access for journalists has been restricted, making it difficult to independently verify fighting claims in the region.

The Ethiopian conflict erupted in November 2020 when Abiy -- winner of the 2019 Nobel Peace Prize -- sent troops into Tigray to topple the Tigray People’s Liberation Front (TPLF) leadership in the Amhara region in response to what he said was attacks by the rebels on federal military camps.

Untold numbers of civilians have been killed, nearly two million have been displaced, and there have been many reports of atrocities including massacres and widespread rape.

By conducting a reverse image search, AFP Fact Check found that the first picture shared in the post shows Saudi Arabian soldiers keeping watch at Khoba, along its border with Yemen, on January 27, 2010. The picture can be seen on the website of stock photography agency Alamy and is credited to Reuters photographer Fahad Shadeed. 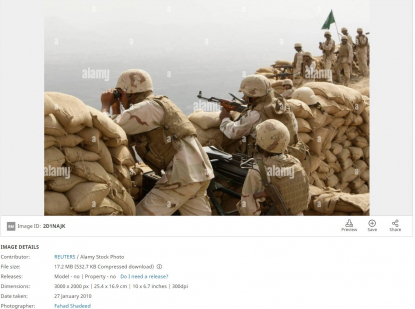 AFP Fact Check was unable to verify the source of the second image showing soldiers marching with Eritrean flags, but it has been online since at least March 2021.

The photo was also published here on Twitter on April 7, 2021.