Skip to main content
People hug at a candlelight vigil for cinematographer Halyna Hutchins, who was accidentally killed by a prop gun fired by actor Alec Baldwin, in Burbank, California on October 24, 2021. ( AFP / DAVID MCNEW)

Facebook posts circulating in Australia purport to show a tweet from Halyna Hutchins, the cinematographer who was killed when actor Alec Baldwin fired a prop gun on a movie set. The tweet was apparently posted three days before Hutchins's death and said she had "information that will lead to Hillary Clinton's arrest". The tweet is fabricated; there is no record of Hutchins posting the message and the screenshot of the tweet shows a verified account, while there is no verified Twitter account belonging to her.

It appears to show a tweet posted on October 18 by an account called @HalynaHutchins. The tweet reads, "I have information that will lead to Hillary Clinton's arrest."

Hutchins was killed during the filming of "Rust" when Baldwin fired a gun he had been told by the film's assistant director was "cold" -- meaning it did not have a live round in the chamber. 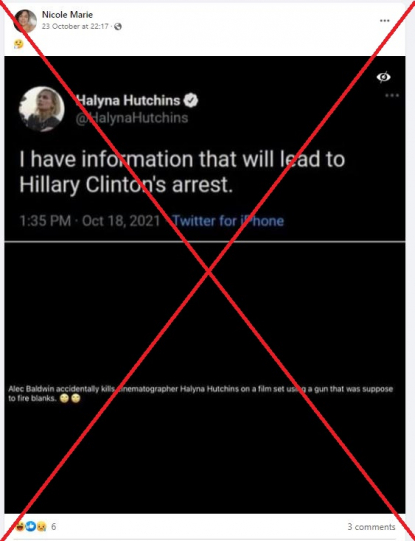 The same screenshot was shared on Facebook here and here.

A search of Twitter accounts belonging to people called Halyna Hutchins found an account @HalynaHutchins, which features the cinematographer's name as both the Twitter name and username, as well as a profile photo of her and a link to her website.

The account does not display any tweets or a blue Verified badge next to Hutchins's name, contrary to the screenshot shared on Facebook. It also features a different profile picture.

Below is a comparison of the Twitter handle @HalynaHutchins (left) and the screenshot shared on Facebook (right).

A screenshot of the Twitter profile, taken on October 23 and made available on the Wayback Machine digital archive tool, shows a message reading, "@HalynaHutchins hasn't Tweeted".

AFP also debunked posts falsely claiming that Hutchins planned to work on a Hollywood pedophilia documentary before her death.