Skip to main content
A photo of cinematographer Halyna Hutchins is displayed during a candlelight vigil for the slain cinematographer in Burbank, California on October 24, 2021 ( AFP / David McNew)

An online article circulating as a screenshot on social media claims the cinematographer mistakenly killed by actor Alec Baldwin planned to work on a documentary about pedophile rings in Hollywood, suggesting her death was linked to a cover-up of child abuse claims promoted by QAnon conspiracy theorists. This is false; one of the cinematographer's agents says she was not scheduled to work on any documentaries, and the article carries a disclaimer that it is fake.

"Halyna Hutchins' next project was documentary on Hollywood pedophile rings," says the headline of the October 24, 2021 article on the World Grey News website, which features a photo of the cinematographer along with one additional line of text repeating the claim. 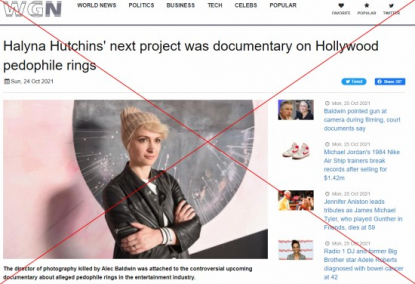 Screenshot of an online article taken on October 25, 2022

Hutchins was fatally shot while working on the movie "Rust" on October 21 when Baldwin was practicing drawing a pistol from a holster.

The World Grey News article -- which spread as a screenshot on Instagram here, here and here -- implicitly links Hutchins' death with the QAnon conspiracy theory that leading Hollywood personalities are part of a cabal of Satan-worshipping pedophiles whom Donald Trump was working to unmask during his presidency.

Comments on the Instagram posts that featured screenshots of the article further tie the claim to the QAnon worldview, making references to convicted pedophile Jeffrey Epstein and former secretary of state Hillary Clinton -- two favored targets of the conspiracy movement's adherents.

One Instagram user commented that the "Epstein cover up goes deep," while another wrote, "Alec owed Killary a favor?"

But the pedophilia documentary claim is false.

"Halyna was not working on, associated with or contacted by any upcoming documentaries.  Her only proposed projects were traditional narrative films," Craig Mizrahi, one of Hutchins' agents, told AFP.

Hutchins had not mentioned any documentaries about pedophile rings in Hollywood on her Instagram page, where she often discussed her projects. Her IMDb page does not mention any such plans either. The only recent documentary that she worked on, "Singularity Song,"  is about black holes in space.

World Grey News -- which allows users the option to create fake articles -- identifies itself as a "prank news website," and the piece about Hutchins has fine print at the bottom saying: "Main article is FAKE." Neither disclaimer appeared in the screenshots on social media.

Social media platforms such as Facebook and YouTube have cracked down on QAnon-related content, which has been linked to various violent incidents, but it continues to circulate online.