Picture from 2009 does not show Kenyan politician's house on fire

An image has been shared on Facebook, Twitter and YouTube in Kenya alongside a claim that it shows the house of former local MP Stephen Tarus set on fire by “angry youth” in October 2021. But the claim is false: the photo has been online for more than a decade and shows a house that burned down in a residential estate in Nairobi.

“The house of former Assistant Minister Stephen Tarus in Kapkangani, Emgwen Constituency reduced into ashes by ‘angry’ youth,” reads a Facebook post published on October 23, 2021, with a photo of a burning house. 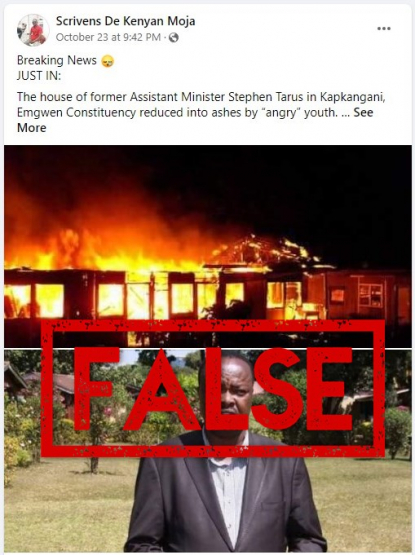 The post added that “the incident comes few hours after Oscar Sudi threatened to deal with him and any other person supporting Rt Hon Raila Odinga in Rift Valley. Sudi should be arrested! (sic)”

The picture started circulating on social media just days after Tarus, a supporter of opposition leader Raila Odinga, clashed with local MP Oscar Sudi, an ally of Deputy President William Ruto, during the burial of athlete Agnes Tirop in Nandi County on October 23, 2021.

Tarus had earlier accused Ruto of doing little for people living in Kenya’s Rift Valley province, including addressing the plight of maize farmers in the region.

By conducting a reverse image search, AFP Fact Check found that the image has been online for more than a decade.

The picture was published on the website of Kenya’s leading newspaper, the Daily Nation, on November 10, 2009, alongside a story about a house that burned down in Nairobi’s South C estate. 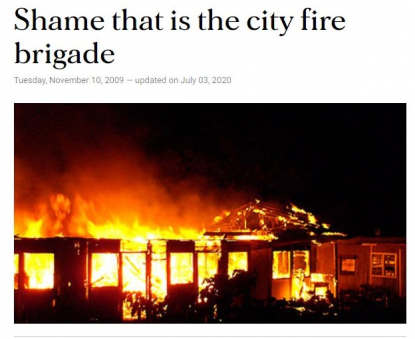 Tarus also told AFP Fact Check that his house was not set ablaze by a mob of youth.

“The claims circulating on social media are false, my house was not set on fire by criminals,” he said.