A meme shared on Facebook claims that the former leaders of Haiti, Tanzania, Burundi, eSwatini and Ivory Coast were assassinated because they opposed Covid-19 vaccines. But the claim is false: there is no evidence to suggest that the five politicians, who died in the past 16 months, were killed for refusing vaccines.

The meme was posted on Facebook in Tanzania on October 20, 2021. It shows five separate panels, each one featuring the character Jim Halpert from the US sitcom The Office, as well as the details and images of the deceased leaders, and the names of their countries on a whiteboard. 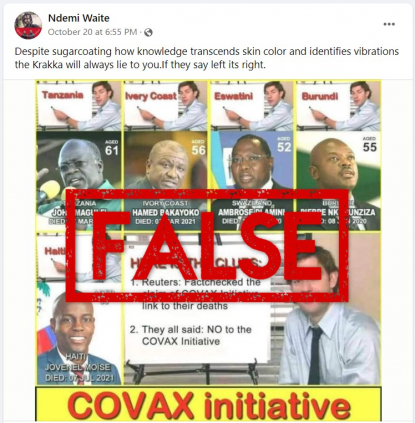 “They all said: NO to the COVAX initiative,” reads part of the text in the meme.

AFP Fact Check debunked a similar meme containing three of the five leaders in July 2021. Thereafter, it changed to incorporate all five, like this Facebook post from the same month with more than 1,000 shares.

However, as previously reported, there is no evidence of a causal link between coronavirus vaccines and the deaths of these politicians.

AFP reported on July 7, 2021, that Jovenel Moise was killed by a gang of armed US and Colombian mercenaries at his residence in the Haitian capital of Port-au-Prince. His wife Martine Moise was also wounded during the attack.

At the time of his death, Moise was becoming increasingly unpopular, but his assassination had more to do with the standoff over the end date of his mandate than with decisions over Covid-19 vaccines. Moreover, while Haiti had expressed hesitancy about receiving the AstraZeneca jab, it did not refuse Covid-19 vaccines outright.

By February 2021, the COVAX vaccine distribution scheme had allocated 876,000 vaccine doses to reach Haiti, but this was delayed due to manufacturing issues in India.

According to the statement, Haitian health minister Greta Roy Clément confirmed that she had written to the Gavi Alliance (Global Alliance for Vaccines and Immunisation) to reject the WHO donation of AstraZeneca vaccines. She asked for it to be replaced with another vaccine more suited to the country, such as Moderna, or the Janssen vaccine by Johnson & Johnson.

The decision was based on safety concerns regarding the AstraZeneca vaccine -- the rare risk of blood clots, and the lack of infrastructure for a double dose vaccine that required special storage and transportation facilities.

On May 18, 2021, Moise urged Haitians to take precautionary measures in a bid to stop the spread of Covid-19. He asked them to “wear masks, social distance, wash hands, and [not to] hug”.

President John Magufuli of Tanzania played down the threat of the coronavirus and dismissed vaccines as a conspiracy of Western countries. He put a stop to the reporting of Covid-19 cases and deaths in May 2020.

Magufuli died on March 17, 2021. His death was announced by Samia Suluhu Hassan, who was the vice president at the time and succeeded Magufuli.

According to Hassan, her predecessor died of a heart condition in Dar es Salaam. Prior to his death, he had not been seen in public for more than two weeks.

There is no evidence that Magufuli was assassinated as the Facebook posts claim.

Meanwhile, Hassan has taken a more serious approach to Covid-19. She has opened Covid-19 testing centres and announced in June 2021 that Tanzania had ordered its first batch of coronavirus vaccines.

In April 2021, AFP quoted her saying that it was “not proper to ignore” the coronavirus pandemic.

Bakayoko did not downplay the existence of Covid-19, and neither did he reject its vaccines. When he contracted Covid-19 in April 2020, he urged his fellow citizens to adhere to Covid protocols. “The coronavirus is a real disease that spreads quickly,” he said.

Eswatini (formerly Swaziland) declared Covid-19 a national emergency on March 17, 2020, and subsequently passed regulations to fight the pandemic. Its measures included lockdown restrictions, health precautions and hygiene protocols based on the guidance of the World Health Organization.

Prior to Dlamini’s death, the country had also expressed interest in accessing Covid-19 vaccines through COVAX. On March 24, 2021, eSwatini launched a nationwide vaccination campaign.

According to government sources in Burundi, Nkurunziza’s death on June 8, 2020, was caused by heart failure. His death occurred several months before coronavirus vaccines were introduced.

Under Nkurunziza’s leadership, Burundi had not imposed any Covid-19 restrictions. He allowed big gatherings to continue while many other countries had put in place lockdown measures.

Although his successor, Evariste Ndayishimiye, has not introduced vaccinations, he regards Covid-19 as his country’s “biggest enemy”.