Blogs and social media posts in several African countries claim that a Zimbabwean judge sentenced a gay couple to 12 months house arrest and ordered them to produce a child in that time, failing which they would receive the death penalty. This is false: while Zimbabwe maintains some of the strictest laws governing same-sex marriage and gay intercourse, AFP Fact Check found that the “judge” does not exist and the purported ruling is a hoax.

A Facebook post of two men hugging has been shared more than 1,800 times since it was first posted on October 18, 2021.

“High court in Zimbabwe has ordered a newly married gay couple to be put under house arrest for 12 months and if by the end of the period none of them will be pregnant, the court further ordered a death penalty (sic),” the post reads. 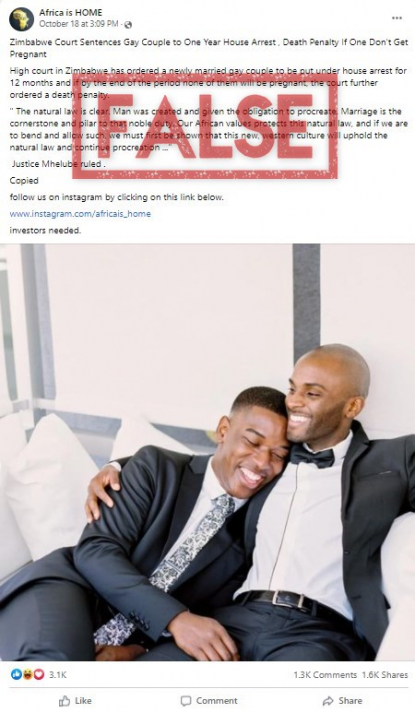 The post includes a quote from a “ruling” purportedly handed down by “Justice Mhelube”, claiming that mankind is obligated to “procreate” based on “natural law”.

The same claim has been published here and here with a different image. 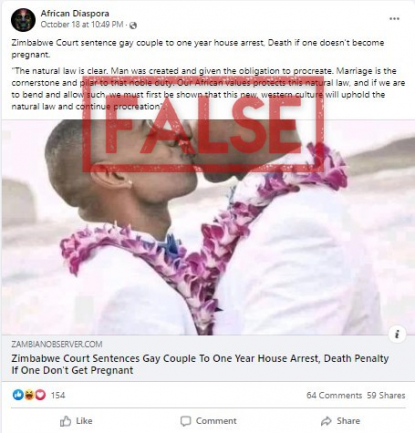 However, there is no official trace of the judge’s name or the alleged ruling.

We have reached out to judicial authorities and will update this debunk in case of a reply.

Zimbabwe is one of about 30 African countries that continues to uphold anti-LGBQTI+ laws, even after its former president Robert Mugabe – infamous for hate speech against gay people – stepped down in 2017. 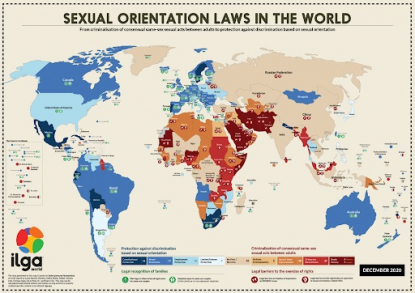 The claim fails to acknowledge that people of the same sex are constitutionally prohibited from marrying one another.

Additionally, section 73 of Zimbabwe’s Criminal Law, Codification and Reform Act outlaws sex between consenting men, who would be “ liable to a fine ... or imprisonment for a period not exceeding one year or both.”

“That judge is not one we know of, also there are no legal reports speaking to a 'newly-married' gay couple,” GALZ said.

"There has been no submission for same-sex marriage that has actually gone to court”.

The organisation said progress was slow with regards to LGBTQ rights in Zimbabwe.

“While under the previous administration our operations were constantly under threat from raids or surveillance, the second republic has a more lenient but undefined stance on the LGBTIQ+ sector.”

Gay couples from US

One of the images used in the false claims was taken in 2017 in the months leading up to the wedding of popular US-based Instagram couple, Dominic and Nick Spence, and is unrelated to Zimbabwe.

Another more viral photo of a different couple on the beach wearing matching white tuxedos and purple-flowered leis also comes from the US and was taken in 2015 at the wedding of Kennedy and Lamar.