No legal basis for petition to decertify US presidential election

Social media posts call for the decertification of the 2020 US presidential election, citing purported irregularities in the vote. But claims of systemic fraud have been repeatedly debunked, there is no legal process for decertifying the election once a president is sworn into office, and constitutional experts say any initiative -- such as a petition aimed at changing the outcome -- has no grounds. 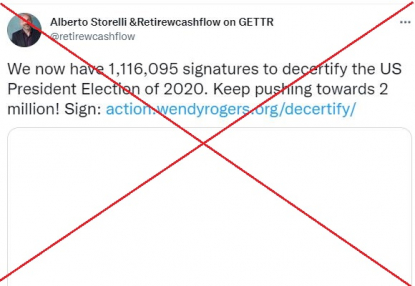 The calls are based on unfounded allegations of large-scale election irregularities in the 2020 presidential election, which Donald Trump lost to Joe Biden. Such claims have been repeatedly debunked by AFP Fact Check and other organizations.

There is no provision in the US Constitution for decertification of a presidential election; removing a sitting president would require impeachment by the US Congress or invoking the 25th Amendment if a president is "unable to discharge the powers" of office. In either situation, the vice president would assume the presidency.

"There is no legal process to decertify the 2020 election, either through petition gathering or otherwise," said Richard Hasen, professor of law and political science at the University of California, Irvine and co-director of the Fair Elections and Free Speech Center.

"The only means of removing a president is through the impeachment process or 25th amendment process set forth in the Constitution, and none of those measures lead to a decertification or to a re-vote," Hasen told AFP.

Constitutional experts noted that the Electoral Count Act, which was passed in 1887, provides for certification of the vote for president, but has no provision for decertification.

Under this law, "state officials certify the results in their states and Congress just counts the votes. It doesn't certify anything," said Richard Pildes, professor of constitutional law at New York University.

Even if a state subsequently tried to undo its certification, "it would have no legal significance," he said.

"The simple answer is there is no legal challenge," Pildes added. "The process is over and the president is in office."

Rebecca Green, a professor of law and co-director of the Election Law Program at the College of William & Mary, agreed.

"There is no process under the US Constitution or any other US law to 'decertify' a presidential election," Green said.

"The Constitution very explicitly sets forth the process for electing the president -- including resolving any disputes -- that ended definitively on January 20," she said.

"Our system of government would be crippled if failed candidates could carry election disputes into the victor's term."