Skip to main content
Container ships wait in the Pacific Ocean to enter the Port of Los Angeles and Port of Long Beach on October 15, 2021 as seen before sunrise from Signal Hill, California ( AFP / Patrick T. Fallon)

US remarks on economy misleadingly portrayed as threat to unvaccinated

An RT article suggests a top US Treasury official sought to blackmail unvaccinated Americans by saying shortages of goods would continue until they all receive Covid-19 shots. But the shortages and higher prices are caused by increased demand and a lack of workers rather than a government plot, and the Treasury official said worldwide vaccination is needed to return the economy to a more consistent state that resembles what came before the coronavirus pandemic.

"US Treasury deputy sec warns unvaxxed Americans that shortages will continue until EVERYONE is jabbed," says the headline of an October 15, 2021 article on the website of the Kremlin-funded outlet, which was formally known as Russia Today.

"Wally Adeyemo, the Biden administration's second-highest official in the Treasury Department, appeared to publicly blackmail the still-sizable portion of Americans who have not been vaccinated against Covid-19," the article says. 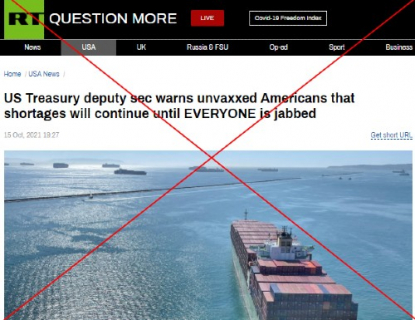 The headline of the article also spread as a screenshot on social media.

"Now we're being blackmailed?" one Facebook user wrote in a post linking to the article, while another post featuring a screenshot of its headline said that "they finally admit they're destroying the economy on purpose to get people j@bbed."

Georgetown University economics professor Matthew Canzoneri dismissed claims that the government is sabotaging the economy, telling AFP that "as an economist, I have not seen any economic facts pointing in that direction."

The RT article refers to America's ongoing supply chain woes, caused among other things by clogged ports, where container ships have had to wait for days to access berths and unload their goods. The bottleneck, combined with labor shortages, slowed US economic growth and contributed to a sharp rise in prices, the Federal Reserve said on October 20.

The rapid surge in demand as the American economy reopened in the wake of the Covid-19 shutdowns has created severe challenges for suppliers who struggle to get key materials and goods. In addition to port issues, transportation firms are struggling to find truck drivers to deliver product, and factories overseas, in some cases, still have not fully reopened.

Canzoneri said: "Disruptions in the labor market are a big part of it. Workers left the labor force, and are living off of savings built up during the pandemic when they could not consume; they may return when their savings run out."

America is not alone in experiencing these problems. Britain and continental Europe are similarly suffering from a stop-start cycle of economic supply and demand that has fluctuated during the pandemic and especially since the summer of 2021.

But the RT article mischaracterizes an October 14 interview of Adeyemo by ABC News' Stephanie Ramos.

After a segment on the supply chain crunch and port logjams, Ramos spoke with Adeyemo, who said: "We always knew that coming out of the pandemic we would have bumps along the way as we reopened the economy."

"Today we face an economy that's in transition," he said when asked about rising prices, adding that "the only way we're going to get to a place where we work through this transition is if everyone in America and everyone around the world gets vaccinated," echoing the administration's long-declared goal of encouraging widespread vaccination.

But rather than threaten Americans, Adeyemo said the government is working to address the supply problems, which have sparked widespread criticism of Biden.

"We're paying a great deal of attention to these issues and making sure that we're using every tool the federal government has to address the supply chain issues and to make sure the American people have the resources they need to make it to the other side of the pandemic," Adeyemo added.

Instead of blocking commerce for vaccination or other reasons, the Biden administration has announced measures including around-the-clock operations at the Port of Los Angeles that are aimed at addressing the problems.

By suggesting that the US Treasury aims to blackmail unvaccinated Americans, the article and posts echo a false theory suggesting that a backlog at ports in the country was intentionally caused by the government, which AFP Fact Check previously debunked.

Backlogs mean ships currently have to wait up to 10 days before coming to berth, Philip Sanfield, a spokesman for the Port of Los Angeles, told AFP in early October.

He said the delays, which started in October 2020 and are expected at least into 2022, are "driven by an unprecedented import surge brought on by consumer demand since the start of Covid-19."