California ports backlogged due to increased demand for goods

Social media posts claim the backlog of container ships waiting to unload at California ports is being caused intentionally to undermine the US economy. This is false; port officials in the state say the source of the problem is increased demands for goods, not a conspiracy.

"If they weren't doing this on purpose. They would have the National Guard helping unload ships by now," says text above an aerial photo of dozens of container ships anchored off the ports of Long Beach and Los Angeles, which is featured in an October 5, 2021 Facebook post. 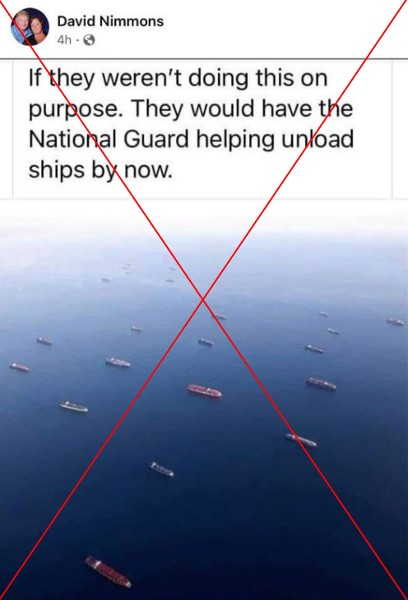 Ports in California -- as well as others in the United Sates -- are experiencing significant backlogs that have left container ships waiting offshore for a chance to access berths.

The logjams have sparked a series of conspiracy theories online, including an article and a tweet that called it a "manufactured crisis."

Facebook posts blamed "(Bidens) UNION longshoreman" for failing to unload cargo to demonstrate need for the president's infrastructure bill, and also claimed the problem was intentionally caused, possibly by the government, in an effort to damage the economy.

But port officials say the claims are false.

"Under normal conditions, container vessels do not wait at anchor for access to berths. Since October of 2020, there have been delays. Currently ships are waiting at anchor about 10 days before coming to berth," said Philip Sanfield, a spokesman for the Port of Los Angeles.

Backlogs are affecting ports around the world and are "driven by an unprecedented import surge brought on by consumer demand since the start of Covid-19," he said.

On the idea of calling the National Guard to lend a hand to unload cargo, Sanfield said that "no agencies or reputable sources have called for this and it is not being considered. There are plenty of longshore dock workers to handle cargo on the docks."

On September 17, the ports of Long Beach and Los Angeles announced that, in consultation with the US Department of Transportation, hours of operation would be increased in order to deal with the backlog.

Lee Peterson, spokesman for the Port of Long Beach, said that "things are backlogged, but cargo is moving," and is not being intentionally held.

"Last year, the ports of Long Beach and Los Angeles processed 17.2 million container units of cargo. It was a record. This year, we expect to process more than 20 million units. So, record amounts of cargo are being moved through the two ports," Peterson said.

"About 60 ships are waiting off the coast to come into berths at one of the two ports. The reason they have to wait, is that the berths are taken, with other ships, being unloaded and loaded," he added.

Both Peterson and Sanfield said that the backlog could last into 2022.

In the smaller Port of Oakland, congestion peaked in June 2021 but was eventually cleared, according to spokeswoman Marilyn Sandifur.

The port did not call in the National Guard, and instead trained hundreds of new longshore workers over the summer while adding new cranes.

"Longshore workers are specifically trained to work the ships and equipment," Sandifur said.

Progress made by ships in Los Angeles and Long Beach ports can be viewed here.