Facebook posts in Sri Lanka purport to show a letter from advertising firm Ogilvy offering its services to a political party ahead of the presidential election due in 2024. However, the posts are missing context; both the party Janatha Vimukthi Peramuna and Ogilvy said the letter was a hoax.

It appears to show a proposal from the Sri Lankan branch of advertising agency Ogilvy for a public relations campaign for the National People's Power (NPP), an electoral coalition led by Sri Lankan opposition party Janatha Vimukthi Peramuna (JVP).

The letter, dated September 5, is addressed to the JVP's media secretary Upul Ranjan and details its objective as "PR Boosting of NPP Candidate for the 2024 Presidential Election". 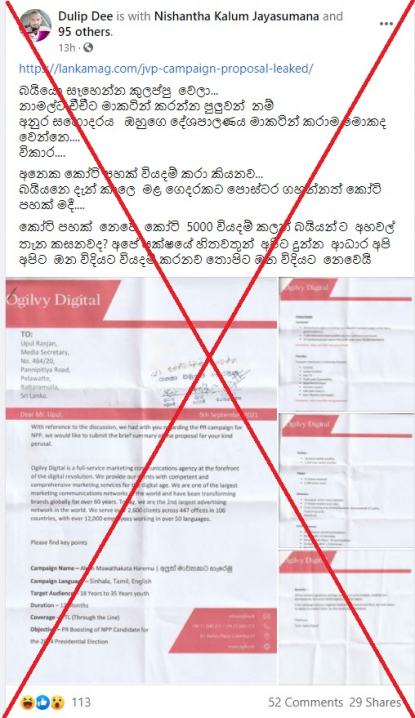 "Baiyyas have got riled up," reads the Sinhala-language Facebook post, referring to a derogatory term for supporters of Sri Lanka's powerful Rajapaksa family that dominates the government.

"If it is OK for Namal and Chichi to market themselves, what is wrong with comrade Anura marketing his politics? Absurd!"

Namal and Chichi are sons of Prime Minister Mahinda Rajapaksa, while Anura refers to the JVP's leader Anura Kumara Dissanayake.

The Facebook post links to an article published on October 17 by Lanka Mag, headlined, "JVP has spent 50 million to boost Anura's image on social media - campaign details outed alongside proof". The article shows the same screenshots of the purported letter.

However, the posts are missing context; both Ogilvy and the JVP said the letter was a hoax.

"We at Ogilvy categorically deny the entire piece, including the images of the purported letter, the letterhead, the article, and all the information contained therein, in its entirety, including but not limited to the article or its constituent photographs," Lalith Sumanasiri, managing director of Ogilvy Sri Lanka told AFP.

The company said it neither made the proposal outlined in the fabricated letter, nor had it worked with the JVP in the past.

"The letterhead is not ours," Sumanasiri added.

The JVP also said the letter was fake.

"The claims made in the posts are false. That is a doctored letter. We never received such a letter and neither have we made such a request from the said company," Upul Ranjan, the party's media secretary told AFP.

The JVP and its relief organisation the Red Star is regularly targeted by misinformation. AFP has debunked various false claims about the organisations here, here and here.