Skip to main content
A man wearing a facemask as a preventative measure against the Covid-19 coronavirus rides a bicycle in front of a mural in Colombo in October 2020.

Photos purporting to show members of a Sri Lankan opposition party delivering care packages to artists affected by the Covid-19 pandemic have circulated in multiple posts on Facebook. The photos, however, have been doctored; party symbols were digitally inserted into pictures from a genuine charity campaign. A party spokesman also told AFP that the organisation was not involved in the campaign.

The photos were published on Facebook here on December 30, 2020.

“Great effort by the Red Star and Dialog. A lot of Sri Lankan artists lost their income sources due to the pandemic. Some have become really helpless,” the Sinhala-language text superimposed on the photos reads.

“The Red Star began helping these artists and visited their homes to extend support. Dialog is also helping and supporting Red Star in this venture.” 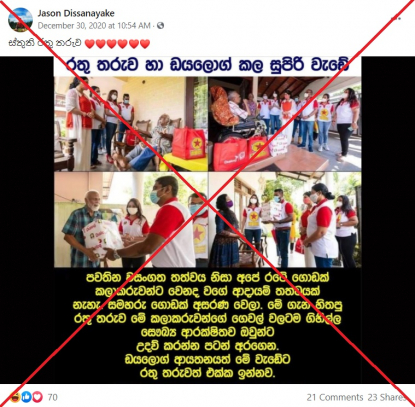 The Red Star is a relief organisation run by the People’s Liberation Front party, an opposition party known locally as the Janatha Vimukthi Peramuna party.

Dialog is a telecommunications company in Sri Lanka.

The images were also shared on Facebook here and here.

The photos, however, have been doctored.

A reverse image search found that the Red Star symbols were digitally inserted into the photos.

The original photos were published on Facebook here on December 28, 2020.

"Since Covid-19 had made it difficult to hold end of  year events and concerts, Dialog took steps to use funds to make donations to senior artists in the country,” the Sinhala-language text superimposed on the photos reads.

“While following health guidelines, they visited the homes of artistes and paid tribute to the contributions they made to nourish local arts. This effort should be commended." 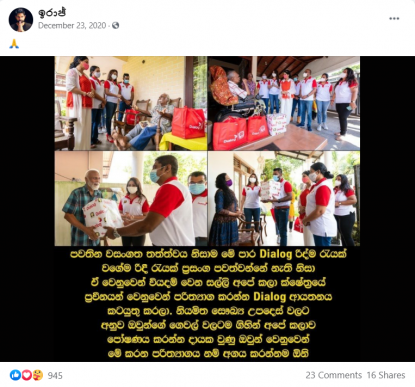 Below is a screeshot comparison of the original photos (top) and the doctored images with the inserted Red Star logos circled in yellow (bottom): 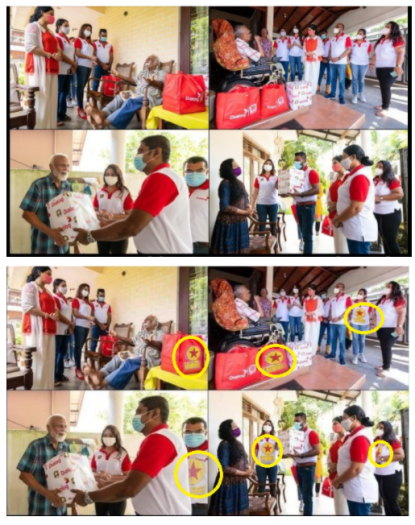 Screenshot comparison of the photos circulating in misleading posts and the original photos shows that the Red Star logo has been digitally added.

A spokesman for the People’s Liberation Front also said that the party was not involved in any such charity campaign.

“We have not launched such a campaign to make donations to local artistes,” the party’s Chief of Media Upul Ranjan told AFP during a phone conversation on January 27, 2021.

The campaign -- launched by Dialog and the CineStar Foundation, which supports local cinemas -- entailed visiting senior artists in their homes to offer them care packages.

The moments captured in the four images were also featured in various reports by local TV station Swarnavahini in December 2020; as seen here , here, here and here.