A video has been viewed thousands of times in Facebook and Twitter posts that claim it shows Indonesian President Joko Widodo and his wife dancing without face masks at the National Games event in October 2021. The claim is false; the footage was filmed in October 2019, months before Indonesia reported its first Covid-19 cases.

"Alhamdulillah.., finally everything is normal again.., you can gather without a mask.., thank you Mr. President and Mrs. Iriana for giving the right example to return to normal life... For the Indonesian people are now free from Corona," reads part of this Indonesian-language Facebook post, published on October 5, 2021.

"Alhamdulillah" is an Arabic phrase meaning "praise be to Allah".

The 21-second video shows Joko Widodo, better known as Jokowi, and his wife Iriana dancing in front of a crowd. They are not wearing face masks. 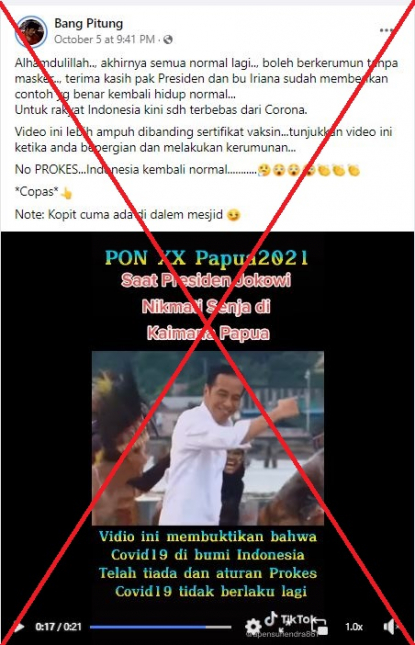 The video, taken from a now-deleted TikTok post , has text overlay which claims it was filmed at the 20th National Games, which was held from October 2 to October 15, 2021, in Indonesia's Papua province.

Overlaid text above the video also reads: "This video is proof that Covid-19 no longer exists on Indonesian soil and the Covid-19 health protocols no longer apply".

A reverse image search on Google found a longer version of the video posted here on October 27, 2019, on the Indonesian Cabinet Secretariat's official YouTube account.

The clip in the misleading posts was taken from the 2:27 mark of the genuine video.

Below is a screenshot comparison of stills captured from the video in the misleading post (left) and the YouTube video (right): 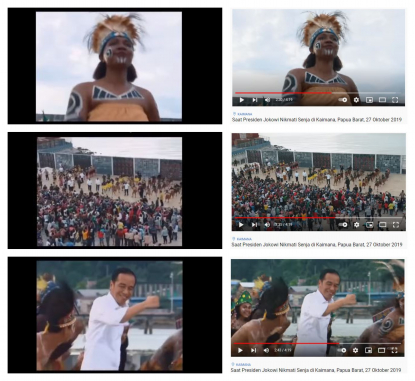 The unrest was fuelled by anger over racism, as well as fresh calls for self-rule in the impoverished territory.

His trip to Kaimana regency, where the above video was taken, was also reported by Indonesia's state-run news agency Antara here.

According to a statement published on the Indonesian president's official website on October 2, 2021, that Jokowi officially opened the 2021 National Games in Papua province on that day.

The games opened after one year's delay due to the pandemic, The Jakarta Post reported.

On October 4, 2021, the Indonesian Health Ministry announced the 275-million-strong country had reached a vaccination rate of two million doses per day.

The Health Ministry also said that residents should continue to follow Covid-19 health protocols, including wearing masks in public.