An image showing Pope Francis inside a temple dedicated to Lucifer has been shared more than 260 times on Facebook in Nigeria. But AFP Fact Check found that the picture has been digitally altered by superimposing the pontiff on a picture of a satanic place of worship.

The Facebook post was published here on October 9, 2021, with the caption: “The mother of all fouls religions (sic)!”. 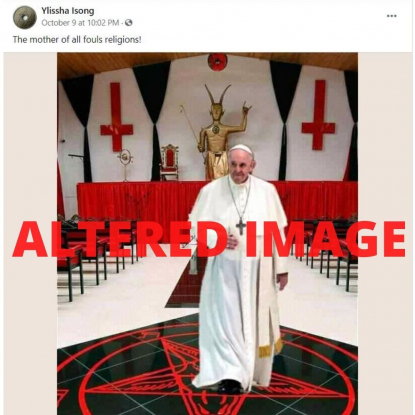 Screenshot taken on October 14, 2021 showing a doctored image of Pope Francis in a satanic temple

The image appears to show the pope standing on a red pentagram inside a building with a demonic effigy and two inverted crosses on a wall behind him.

But the image has been doctored and consists of two superimposed pictures.

A reverse image search led to a 2017 documentary by VICE magazine about a satanic temple in Colombia and its founder, Victor Damian Rozo, a self-proclaimed offspring of the devil.

The temple seen in the video matches the building in the Facebook post. It shows inverted crosses, a statue of Lucifer and the popular signs and symbols used to depict the devil, including the eye in a star or triangle, believed to be the symbol of the Illuminati. 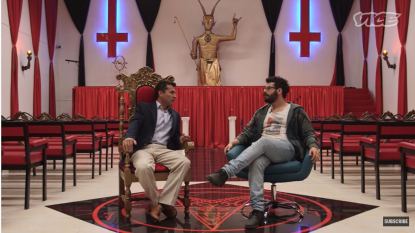 A screenshot taken on October 15, 2021, showing the temple interior as seen in the VICE documentary

In 2019, the Colombian government won a three-year legal battle against the temple, ordering it to be shut down.

Pope in the Vatican

A closer look at the image shared on Facebook shows signs that Pope Francis was etched and inserted into the picture using digital software. By cropping out the pontiff and running another reverse image search, AFP Fact Check found the original picture of him. 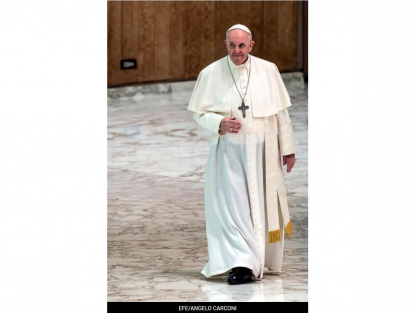 The image was taken by photojournalist Angelo Carconi for Spanish news agency EFE and shows the pope at the Vatican. 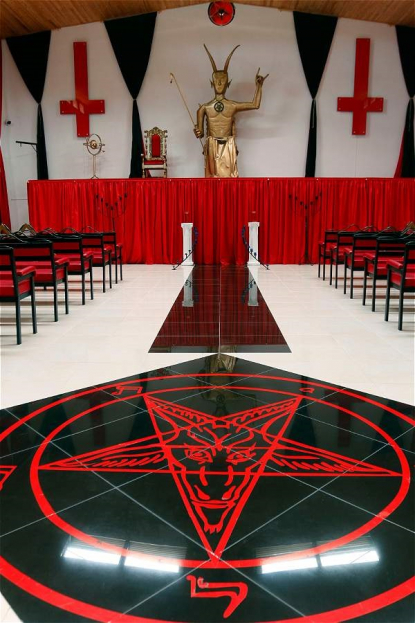 AFP Fact Check traced the earliest version of the temple image to a 2016 article about its launch.

Despite the legal battle with the Colombian government, the temple appears to be in operation, as seen on its Facebook page.