Skip to main content
A man puts his voting paper in the ballot box for the Australian Federal Election in Melbourne on July 2, 2016. ( AFP / Paul Crock)

Multiple posts shared repeatedly on Facebook claim that electronic voting machines will be introduced in Australia's next federal election. The claims allege that machines provided by tech firm Dominion Voting Systems -- which were used in the 2020 US presidential election -- will replace manual voting in Australia's polls. However, the Australian Electoral Commission (AEC) told AFP that it had no relationship with Dominion and that voting and vote-counting will remain manual processes.

It features a screenshot of a tweet that reads: “AEC proposes to acquire ‘Dominion Voting Systems’ machines. The AEC is proposing[1] the use of the same Dominion Voting Systems [2] machines to count votes that are being used in America. You know the voting machines where the integrity of these machines is being questioned.” 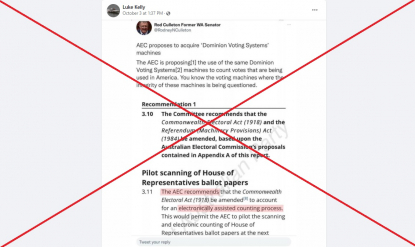 No date has yet been set for Australia's next federal election but it is expected to take place by late May 2022.

Machines from Dominion Voting Systems were used in many US states during the 2020 election, in which Donald Trump lost to Joe Biden.

The company faced a deluge of false claims of fraud -- which it categorically denied --  following the vote.

No credible cases of vote manipulation have been found.

A similar claim was shared here and here on Facebook.

Claims that Dominion machines will now be used in Australia are misleading.

A spokesperson for the country's electoral commission told AFP in an email on October 15, 2021 that it had not worked with Dominion and had no plans to do so.

“The document being referred to [is] old – it is a report of the Parliament’s Electoral Matters Committee, produced in 2017. We’ve seen claims in a few online forums that it ‘proves’ the AEC is working or planning to work with Dominion, but that is simply incorrect. Again, without commenting on the claims around this organisation, it is important to note that the AEC and Dominion were merely mentioned in adjacent paragraphs of a report we didn’t write,” the AEC’s response reads.

“In fact, we’ve never had any form of relationship with Dominion at all, so do not have an opinion on their voting machines or systems.”

In Australia, votes are made and counted by hand. AEC stated that the manual system will remain in place.

“Your vote is still made with a pencil (or pen!) and paper, and is still counted and sorted entirely by hand in a process that is fully open to party-appointed scrutineers,” the AEC statement reads.

The AEC clarified that its proposal to change legislation in order to enable the piloting of electronic vote-scanning and counting -- which was mentioned in the 2017 report and cited in the misleading posts -- did not come to fruition.

"The AEC was at that time looking at the possibility of a trial of electronic assistance. The AEC always has to be conscious of the mammoth task of running the federal election and what the needs may be as we move forward," it said in a statement.

"However, this did not eventuate. The legislation was not changed and there has not been any notable debate on such matters since."

Dominion Voting Systems has made no announcement on its website that it was supplying machines to Australia.