Skip to main content
The US Capitol in Washington, DC on August 11, 2021, a day after the US Senate approved the $1.2 trillion infrastructure investment plan backed by President Joe Biden ( AFP / Olivier Douliery)

US infrastructure bill does not include 61 percent estate tax

Facebook posts claim that the US infrastructure bill being considered by Congress includes a provision taxing all individual assets at 61 percent after a person dies. This is false; experts say the bill contains no such measure, and while President Joe Biden proposed an increase to taxes after death earlier this year, it only applied to the wealthy and is not included in the current legislation being considered.

"How Many Citizens Are Actually Aware Under Part 2 Of The Infrastructure Bill, Upon Death The Entire Value Of Your Accumulated Wealth & Estate Will Be Taxed At 61%..?" says an October 8, 2021 Facebook post. 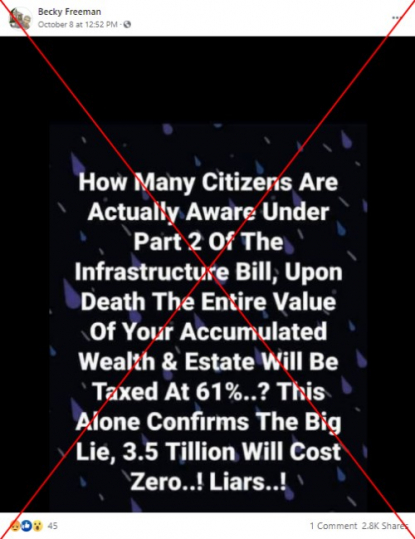 After passing the Senate, the $1.2 trillion infrastructure bill stalled in the House of Representatives, with deep divisions within the Democratic Party threatening Biden's agenda.

Gleckman, a senior fellow at the think tank, explained that the draft legislation of the Build Back Better Act -- not the infrastructure bill -- "would lower the estate and gift tax exemption from about $11 million to $6.020 million ($12.040 for a couple). Estates valued at less than that amount would owe no federal tax."

Neither the infrastructure bill (HR 3684) nor the Build Back Better bill (HR 5376) have become law, and both are subject to future changes.

Tax Foundation senior policy analyst Garrett Watson pointed to an April 29 report he co-authored, which found that Biden's two major tax increases proposed in his American Families Plan add up to a "61 percent tax on the wealth of high-earning taxpayers."

"The 61 percent effective tax rate would not apply to taxpayers writ-large."

But Biden's suggested tax increases did not make it into the Build Back Better tax proposals, meaning "this proposal may not make it to the final package. The Senate Finance Committee has not yet released their own tax proposals, though, so it could still be included later on," Watson said.

Even if it were to be added into the law, estate and financial planning attorney Leon LaBrecque explained that the tax hike would only affect "a small number of higher income/higher wealth folks."

LaBrecque, who also chairs the Michigan Association of Certified Public Accountants special task force on new tax legislation, added: "All is in flux, but the direction of the proposals is away from the huge tax increase."

Scott Swartz, a tax attorney and instructor at John Carroll University's Boler College of Business, also addressed the social media claims: "There is no such tax in the infrastructure bill. There's different levels of inaccuracy here."

The current estate tax top rate is 40 percent above the $11.7 million exemption level for 2021 according to the Internal Revenue Service. That means fewer than 0.1 percent of estates are subject to this tax, according to the Tax Policy Center's estimate.

The closest proposals to what the posts describe is Senator Bernie Sanders' For the 99.5 Percent Act, or Elizabeth Warren's Ultra-Millionaire Tax Act, Swartz said.

"But none of those have gone anywhere, they're just sitting in committee."