A chairperson of South Africa’s largest opposition party recently shared a video that appears to show former Springboks rugby coach Peter de Villiers describing a government minister as corrupt. But the claim is false: the clip has been edited and made to appear as if De Villiers, a mayoral candidate in upcoming local elections, labelled his party leader and former Cape Town mayor Patricia de Lille as corrupt.

According to Media Monitoring Africa, which runs a misinformation portal, Democratic Alliance (DA) federal council chairperson Helen Zille posted the video to Twitter and published it on Facebook on September 12, 2021, before it was taken down. 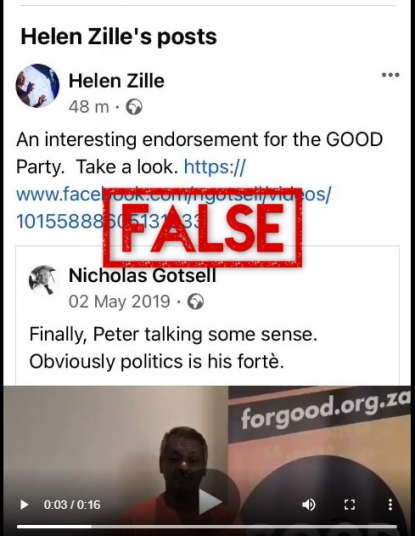 A screenshot of Helen Zille’s post before it was deleted

The 16-second clip features De Villiers with a rugby ball in his hands endorsing De Lille, leader of the GOOD political party and currently a government minister.

De Villiers, a former national rugby team coach, introduces himself and then says that he supports De Lille because “she has a history of corruption ...” before the clip ends abruptly.

De Lille, a former Cape Town mayor under the DA, fell out with the party in 2018 over graft claims and went on to launch her own GOOD movement. De Villiers is standing as GOOD’s mayoral candidate in the Drakenstein municipality in local elections on November 1, 2021.

The clip shared on Zille’s account was first posted on Facebook by the DA’s Nicholas Gotsell in the lead-up to general elections in 2019. 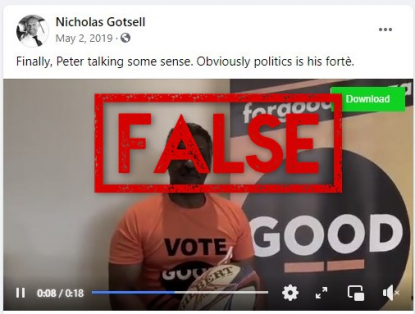 However, by conducting reverse image and keyword searches, AFP Fact Check found that the full video has been edited to insinuate that De Villiers called De Lille corrupt.

The original video was posted online by South African media company News24 on May 1, 2019. In this version, which lasts 43 seconds, De Villiers says that De Lille “has a history of corruption busting and principled leadership” and encourages others to vote GOOD.

South Africa’s municipal ballots are held every five years to elect leadership at metropolitan, district and local levels in more than 200 municipalities across the country’s nine provinces.

De Lille was kicked out of the DA over accusations of corruption, maladministration and poor governance in 2018. However, a South African court cleared her of the charges and ordered that her party membership be reinstated.

Later that year, she resigned from her mayoral position and the DA to found the GOOD party.