This image shows the execution of an Iranian man who killed a judge, not a condemned preacher

Facebook posts sharing an image of a smiling man with a noose around his neck claim that he was sentenced to death in Syria for “preaching the gospel”. The claim is false; the image shows an Iranian man moments before he was executed in 2007 for assassinating a local judge.

On October 4, 2021, this Facebook post circulating in Kenya was shared with an image of the man’s impending public execution alongside the caption: “He was sentenced to death in Syria for preaching the gospel and is laughing to the gallows because he knows his time to meet Christ Jesus is coming”. 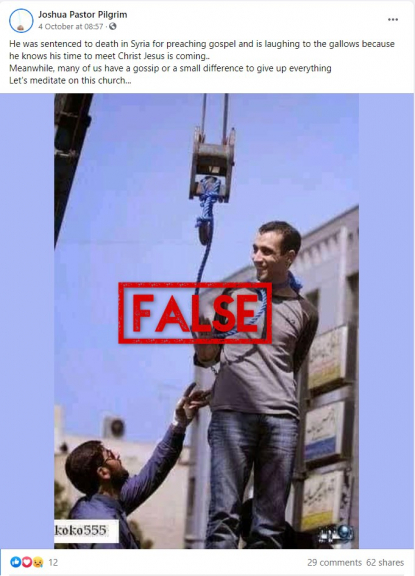 But the claim that this man was executed in Syria for preaching the gospel is false.

In 2019, images of the same man circulated in Indonesia alongside the claim that he was an Algerian hacker being executed for stealing money from Israeli banks. AFP Fact Check debunked the claim here.

A reverse image search shows that the condemned man was Majid Kavousifar, an Iranian who was sentenced to death for assassinating a judge in Iran.

A search using the keywords “Majid Kavousifar’s execution” on Google reveals news reports here, here and here about the public hanging, which took place in Tehran on August 2, 2007.

According to this report by AFP, Kavousifar and family member Hossein Kavousifar were hanged for killing Hassan Moghaddas, a top Iranian judge, in 2005.

This AFP photo shows Majid Kavousifar bidding farewell to his relatives who attended the execution. 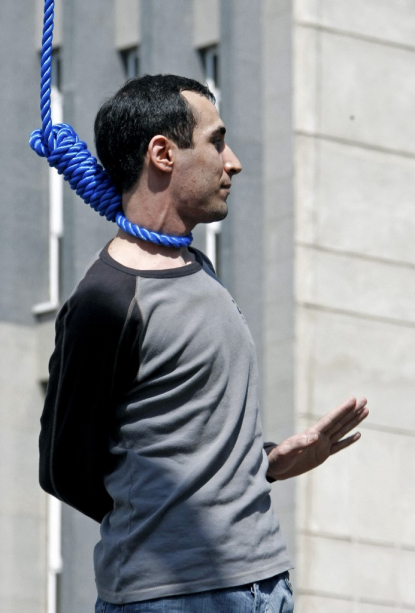 Iranian Majid Kavousifar bids farewell to his relatives before being hanged in public in Tehran August 2, 2007 ( AFP / BEHROUZ MEHRI)

Execution remains a legal form of punishment in Iran, and in 2020, at least 267 people were hanged.