Skip to main content
Draymond Green of the Golden State Warriors (R) jumps for the ball with Louis Williams of the Los Angeles Lakers during a 2016 NBA game in Los Angeles, California ( AFP / Frederic J. Brown)

Social media posts feature an image of NBA player Draymond Green wearing a white T-shirt emblazoned with a cartoon syringe and strong language, as the league pushes for players to be vaccinated. But the picture has been digitally altered, and the original version was shared in 2017, years before Covid-19 swept through the United States.

"Draymond Green with no chill," reads a Facebook post with a photo of the Golden State Warriors player wearing the T-shirt with the cartoon syringe shrugging, next to a speech bubble that says: "Fuck it, die then." 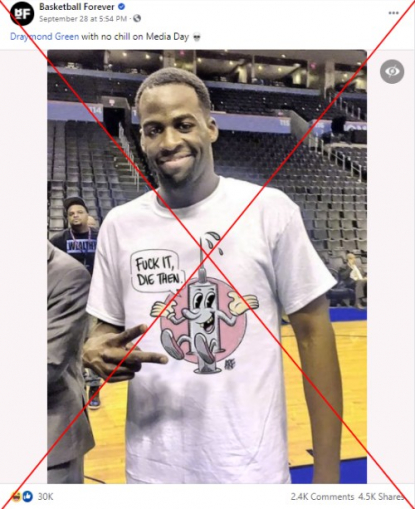 Amid the current NBA push for mandatory vaccination of players, Green refused to convince a teammate to get the shot, calling the decision to get vaccinated "personal." Unvaccinated players in certain markets -- notably San Francisco and New York -- will be forced to miss their team's home games because they fall foul of local laws requiring all home team staff to be vaccinated.

AFP Fact Check ran a reverse image search using Yandex, which revealed that the social media image predates the pandemic, and Green's shirt actually had a cupcake on it.

Sports reporter Rachel Nichols tweeted a picture of Green in the cupcake shirt on February 11, 2017 with the message: "Draymond Green in his new t-shirt." 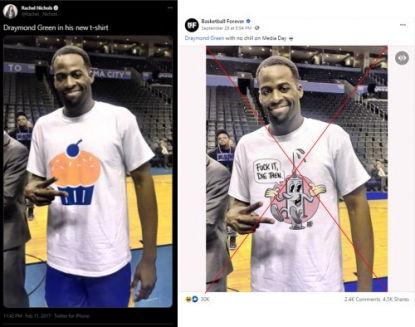 He wore it after a win against the Oklahoma City Thunder, whose fans taunted then-Golden State player Kevin Durant by wearing cupcake costumes, indicating Green's teammate was "soft."

Covid-19 first reached the United States in 2020, and vaccines against the disease were not widely available until 2021 -- years after the photo was first posted.

The US Centers for Disease Control and Prevention (CDC) says that Covid-19 infections, hospitalizations and deaths are more prevalent among unvaccinated versus vaccinated people, and that shots against the disease are safe and effective.