An image has been shared thousands of times on Facebook in Ethiopia alongside a claim that it shows a 26-year-old hospitalised widow named “Asafaashi” waiting to undergo an operation. But the claim is false; the picture shows Kenyan media personality Njambi Koikai when she was hospitalised with endometriosis in the United States.

The photo, which shows a patient lying on a hospital bed with a surgical dressing covering part of her torso, was first published on Facebook in 2018. It recently resurfaced (here and here) on Facebook and has been shared more than 21,000 times. 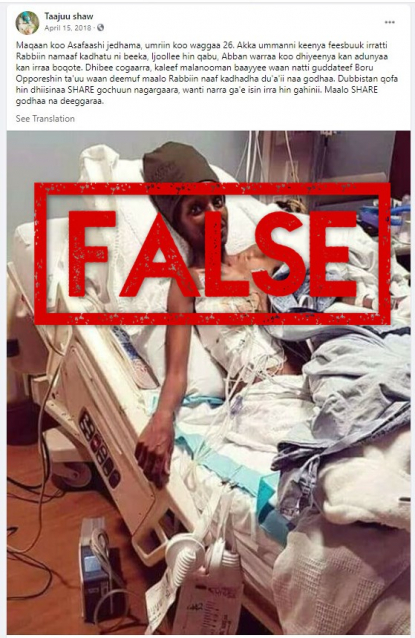 “My name is Asafaashi Jedhama. I am 26 years old. I know that our people pray for others via Facebook. I have no children and my husband passed away recently. I got severe sickness related to gastric, kidney failure and melanoma and am going to undertake surgery. I would like to request you to pray for me to God. Please don't read and ignore this, please share it. May God protect you from such problems. Please share this and help me (sic),” reads the English translation of the post’s Somali caption.

But the claim that the photo shows “Asafaashi’— a 26-year-old widow— is false.

By conducting a reverse image search, AFP Fact Check found the image on Njambi Koikai’s official Instagram and Facebook accounts. The Kenyan radio and television presenter posted the photo in March 2018 when she was being treated for endometriosis in the US.

To raise awareness about the condition, Njambi also shared her story with the Endometriosis Foundation of America in an article published on the organisation’s website in April 2018.

According to the organisation, Njambi had endured “painful periods for 18 years” and suffered a lung collapse during her menstrual cycle three years earlier.

Endometriosis is a disease in which the tissue that lines the inside of the uterus grows outside the uterus. Main symptoms of the disease include lower abdominal pain, pain or excessive bleeding during menstruation, pain during sexual intercourse, and infertility problems.