An image has been shared repeatedly on Facebook and Twitter alongside a claim it shows an anti-vaccination protest in Melbourne -- Australia's second-largest city -- in September 2021. The claim is false: the image shows workers in Melbourne rallying against labour laws in 2006.

"Melbourne this weekend," the caption reads. "Time for Queenslanders to stand up before it gets as bad as [Victoria]".

Text superimposed on the image states in part: "This is the image you won't see today! Share it around!" 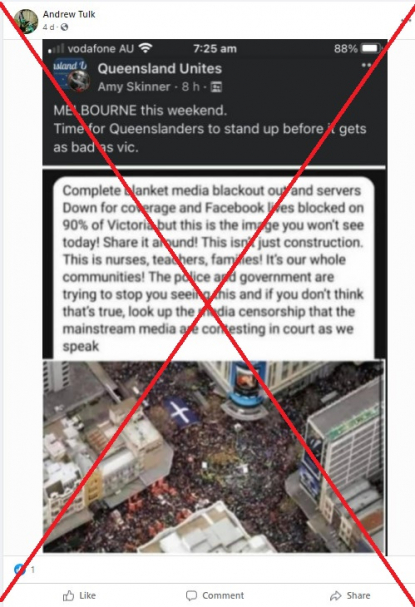 The image was also included in a report published here on the 2021 protests by The Australian newspaper.

The caption reads: "Industrial relations protest rally in Melbourne. An aerial view of marchers at the corner of Swanston and Bourke streets, Melbourne".

An identical photo was uploaded to Newspix, the image licensing department for News Corp Australia.

The caption states: "Aerial view of protesters gathered at the intersection of Swanston Street and Bourke Street in Melbourne, Victoria as they take part in an industrial relations rally".

Below is a screenshot of the Newspix photo:

A screenshot of the Newspix website as of September 27, 2021.

Tens of thousands of workers attended mass rallies across Australia -- including Melbourne -- to protest against labour laws, according to another news report published by The New York Times on June 28, 2006.