A post shared on Facebook in Ethiopia claims that Tedros Adhanom has been re-elected to serve a second term as the director-general of the World Health Organization (WHO). But the claim is false; Tedros is still serving his first term in office, and elections for the post are slated for May 2022.

The post was published on Facebook on September 22, 2022, and has since been shared nearly a hundred times.

The post is written in two local Ethiopian languages: Afaan Oromoo and Amharic.

The first sentence, written in Afaan Oromoo, translates to: “Dr Tedros Adhanom has been appointed as WHO director-general for a second term.”

The second sentence, written in Amharic, translates to: “The Twitter campaign has failed and Dr. Tedros Adhanom has been elected as director-general of the World Health Organization (WHO) for the second term.” 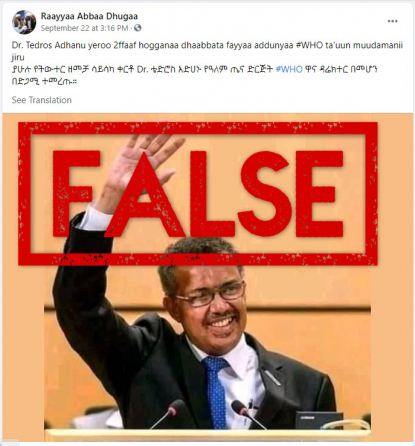 Tedros, who is Ethiopian, has been the public face of the global fight against the Covid-19 pandemic ever since the SARS-CoV-2 virus emerged in Wuhan, China in December 2019.

He was elected as the head of the UN health agency in 2017, making him the first African to take the helm of the organisation.

But the claim that Tedros has been elected to serve a second term as WHO chief is false.

First term not yet up

The WHO is yet to hold elections to elect its next director-general.

According to the WHO website, this appointment is slated for May 2022 during the 75th World Health Assembly (WHA). Member states will vote by secret ballot.

Tedros, whose first term in office ends in 2022, is eligible to run for a second term as the WHO boss. Terms for this position last five years.

The WHO told AFP Fact Check in August that the organisation was receiving applications from candidates interested in the position.

“Information on candidates, including the curricula vitae and other particulars of their qualifications and experience as received from member states, will be published following the closure of the last regional committee meeting of the year, shortly after October 29, 2021,” said the WHO.