An image of a new US fighter jet carrying an array of missiles has been shared hundreds of times on Facebook. The image, however, has been digitally altered; the original picture has far fewer missiles. Additionally, the jet’s manufacturer, Boeing, said the image does not show “the correct weapons configuration of the aircraft”.

On August 26, 2021, a post published on a Facebook group called Military Aircrafts shared an image of a fighter jet fitted with at least 22 missiles alongside the caption “F-15EX ...can be armed with up to 12 AMRAAM missiles”. The post has since been shared more than 700 times.

The F-15EX is the latest fighter aircraft developed by Boeing for the US Air Force. The first jet was delivered on March 10, 2021.

While the caption accurately points out that the fighter jet can carry up to 12 Advanced Medium-Range Air-to-Air Missiles, or AMRAAM, the image shared in the Facebook post has been digitally manipulated to add extra missiles, which are slightly darker than the rest.

“Please refer to our F-15EX site which has a gallery of images showing the correct weapons configuration of the aircraft,” VanNierop said in an email to AFP Fact Check.

The images on the website show a jet with 12 missiles, with six on either side, and do not feature the extra, darker missiles in the middle seen in the digitally altered image shared on Facebook. 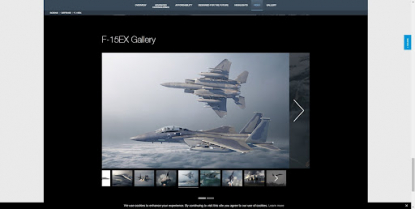 A screenshot from Boeing’s website showing the F-15EX with missiles, taken on September 17, 2021