The post features a picture of a document with text in French reading "Vaccine Certificate" while the rest is written in Ottoman Turkish.

Beneath the picture, there is Indonesian-language text that reads: "The oldest vaccine certificate in the world, year 1721 AD. Issued by the Ottoman Turkish Islamic Caliphate. Vaccines are part of an advanced Islamic civilisation." 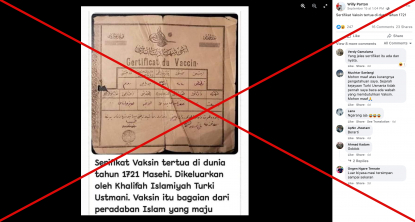 The Ottoman Empire ruled many parts of the Middle East, Eastern Europe and North Africa for more than six centuries before the Republic of Turkey was declared in 1923.

Various experts said the vaccine certificate was issued in 1906, and not in 1721 as the misleading posts claim.

Benjamin Fortna, professor of history and director of the School of Middle Eastern and North African Studies at the University of Arizona, said the year at the bottom of the certificate corresponds to 1906 in the Gregorian calendar.

"The date given at the end of the document states 27 Agustos 1322, which is given in the Rumi (Ottoman administrative solar) calendar," he told AFP, adding that he used the online calendar conversion provided by the Turkish Historical Society (Turk Tarih Kurumu).

Renee Worringer, associate professor of Islamic and Middle East history at the University of Guelph in Canada and author of the book "A Short History of the Ottoman Empire", also told AFP that the year at the bottom of the certificate was 1322, which "most likely" corresponds to 1906 in the Gregorian calendar.

Nukhet Varlik, associate professor of history at Rutgers University in New Jersey and author of the book "Plague and Empire in the Early Modern Mediterranean World: The Ottoman Experience, 1347-1600", agreed the date on the Gregorian calendar was 1906.

Text on the certificate indicated it was issued to a 22-year-old Greek Orthodox man from Istanbul who received his third vaccine, although it did not mention which jab he received, she said.

"We know that many different vaccines against infectious diseases (e.g., smallpox, plague, cholera, typhus, rabies, etc.) were administered" at the time, Varlik said.

She said the vaccine certificate was "definitely not the world's oldest" and pointed to a study that highlighted examples of the Ottoman vaccination documents from 1903.

AFP Fact Check previously debunked a misleading claim that the world’s first vaccine was developed under the Ottoman Empire.