Several images of protests have been circulating on Facebook in Ethiopia alongside claims that they show recent demonstrations against the Tigray People’s Liberation Front in the region’s capital, Mekele. This is false. There are no reports of recent protests; AFP Fact Check found that four of the photos are old or from unrelated events, and was unable to source a fifth photo's provenance.

The images were posted on Facebook on September 14, 2021, and have been shared more than 400 times since. 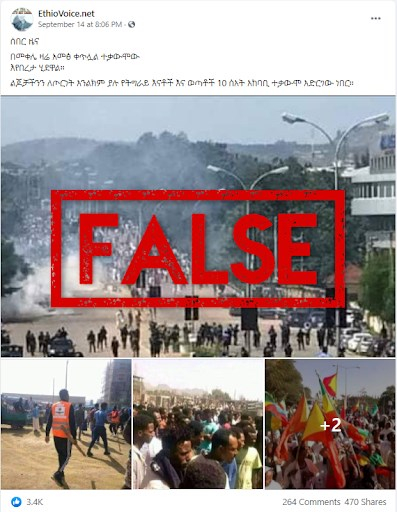 “Protests continued in Mekele today and are getting more violent. Mothers and youths of Tigray, who said they would not send their children or go to war protested around 4 p.m,” reads the post’s Amharic-language caption.

Although TPLF is not directly mentioned in the post, a protest against participating in the Tigray conflict would mean opposing the movement.

Ethiopia's northern region of Tigray has been embattled in a deadly conflict that has claimed the lives of thousands and displaced millions. It erupted when Ethiopian Prime Minister Abiy Ahmed ordered a military operation in the region in response to an attack on a federal army camp by TPLF soldiers on November 3, 2020. TPLF dominated national politics for decades until Abiy’s election in 2018.

But the claims are false. There are no reports of recent protests in Mekele, and AFP Fact Check found that most of the images are old and unrelated to the ongoing conflict.

The first photo shows a large road where a riot seems to have broken out. Despite the image’s low quality, a row of men in black is identifiable in the foreground, with a large crowd facing them in the background.

AFP Fact Check ran several reverse image searches and found that the photo was taken in Nigeria’s capital city, Abuja, and has been online since 2018.

A clearer version of the same image can be found in an article published by Radio France Internationale (RFI) in October 2018. The article led us to the original image in the Reuters Images database. The photograph was taken by Abraham Achirga on October 30, 2018.

Screenshot of the original image on the Reuters website, taken on September 21, 2021

“Members of security forces are pictured as smoke is seen in the background during a protest by members of the Islamic Movement of Nigeria in Abuja, Nigeria,” the photo’s caption reads.

At least three people were killed during the protest march in Abuja, as AFP reported.

The second image in the false Facebook post shows a small crowd gathered in a street. It appears that the road has been blocked using stones. AFP Fact Check found that the picture has been circulating online at least since December 2020.

The image was widely shared on social media on December 3, 2020, with users describing it as being taken in Mekele.

The image was also posted in an Ethiopian web forum on the same day. 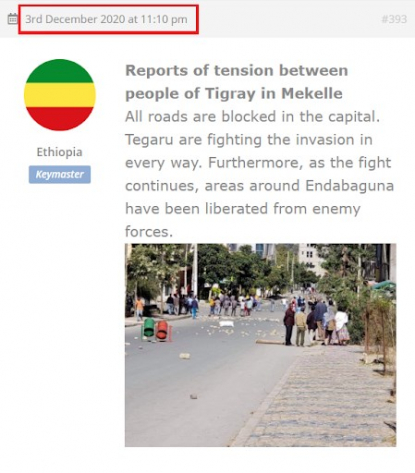 Since it was first shared nearly a year ago, it therefore cannot show a recent protest.

The third image shared in the false Facebook post shows a large crowd of men gathered outside buildings under construction.

AFP Fact Check traced the image to a Facebook post published on May 18, 2020. According to the post’s caption, written in Amharic, the image shows a protest in Mekele.

“Breaking News Protests erupt in Tigray Enderta (Mekele), Shire ... Blood is being spilled in regard to these regions making self-determination demands,” reads the post’s caption, translated to English.

However, it cannot show a recent protest, as it has been circulating online for more than a year. 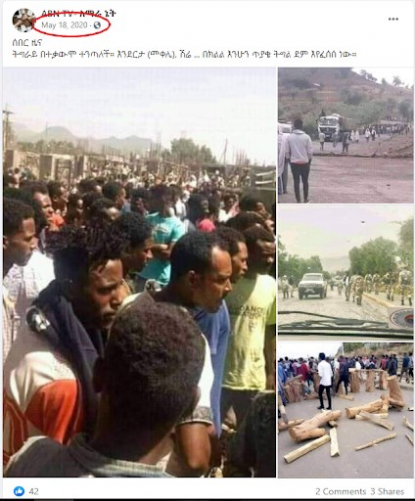 The fourth image featured in the false Facebook posts shows a group of women waving both Ethiopia's flag and Tigray’s regional flag. 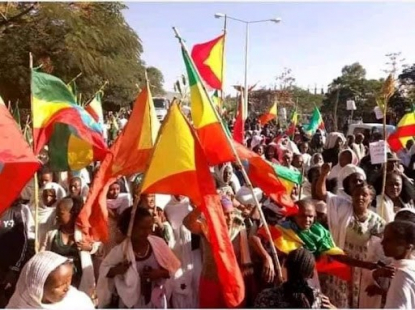 It, too, is old. The image was published on US-based news site ESAT (which stands for Ethiopian Satellite Television and Radio) back in November 2018, in an article discussing peaceful anti-corruption demonstrations in Mekele.

AFP Fact Check was unable to trace the remaining image in the post. The photo shows a man wearing an orange vest, holding a large stick in his right hand. Behind him is a man whose uniform matches that of Ethiopian police officers. 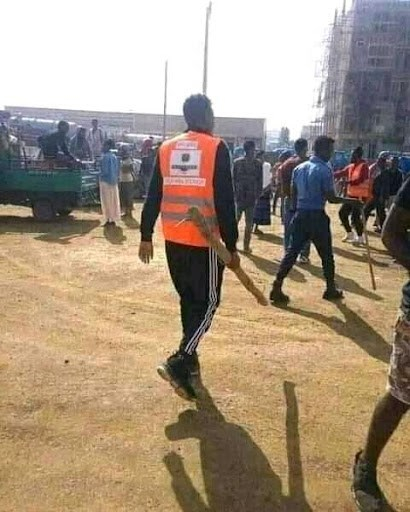 If you recognise the image, you can contact AFP Fact Check here.