Image of woman reading without veil is Czech magazine advert

An image of a woman without an Islamic veil reading a book has been shared hundreds of times on Facebook and Twitter alongside a claim that it was created by Afghan artist Shamsia Hassani, after the Taliban seized power in Afghanistan. The claim is false. The image is actually an advertisement for a Czech magazine, Reporter, from 2018. Hassani has clarified on Twitter that it is not her artwork.

The illustration was posted on September 13, 2021, here on Facebook.

It shows a woman without a head covering reading a book as she walks in the opposite direction to a crowd of women wearing burqas. 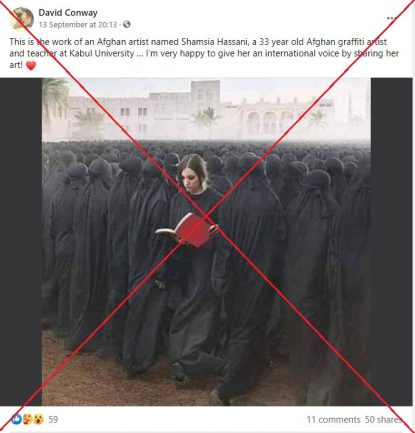 The post's caption reads: "This is the work of an Afghan artist named Shamsia Hassani, a 33 year old Afghan graffiti artist and teacher at Kabul University … I’m very happy to give her an international voice by sharing her art!"

Shamsia Hassani is an Afghan graffiti artist and teacher at Kabul University who often portrays Afghan women through her artworks.

After seizing power in Afghanistan in mid August, the Taliban has tightened its grip on women's rights, denying access to work and effectively barring girls from going to secondary school, AFP reported here.

The same image has also been shared with a similar claim in Indonesian, Spanish, Portuguese and French.

Combined Google reverse image and keyword searches found the same illustration was posted here in 2018 on the website of international advertising awards programme, the Clio Awards.

The original illustration shows that the book read by the woman is actually the Czech magazine, Reporter, not a book with a red cover as shown in the misleading image.

Two other images — Questioning Neo-Nazism and Questioning War — were also part of the campaign.

Below is a screenshot comparison of the image in the misleading post (L) and the original illustration (R):

The photographer Pavel Hejny and one of the creative directors, Atila Martins, posted the image on their website here and here.

Hassani tweeted on September 14, 2021, saying that the illustration is not her artwork.

Recently I noticed that hundreds of social media users shared this image as my artwork on their profiles/ pages, but this is not my artwork.
I know that they wanted to support me and my art but please make sure to give the credit to the real artist. pic.twitter.com/MGRf5776cB