This footage was taken at the Czech embassy in Kabul

A video that shows a group of men in a room full of alcoholic drinks has been viewed thousands of times in social media posts alongside a claim it shows Taliban members discovering liquor in the house of Afghanistan's former foreign minister. The video was shared after Taliban seized control of Afghanistan. However, the claim is false. The footage was taken at the Czech embassy in the Afghan capital, Kabul.

The clip, which shows a group of men in a room full of liquor bottles, has been viewed more than 10,000 times. 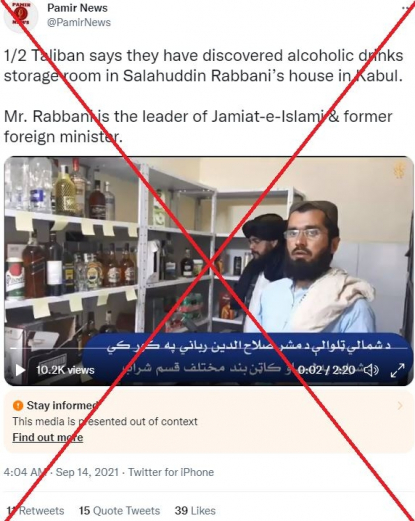 Former Afghan foreign minister Salahuddin Rabbani is the leader of Jamiat-e Islami — one of the oldest political parties in Afghanistan.

Rabbani has long been an advocate against terrorism and the Taliban movement.

The Islamist group vowed to rule Afghanistan under their interpretation of sharia law, which prohibits drinking alcohol.

A longer version of the video was also shared with a similar claim here.

A similar video was posted with a similar claim in Thai on Twitter here and on Facebook here.

The report is titled: "The Taliban takes over the warehouse of the Czech embassy. Becherovka and mustard have been seized."

The report partly reads: "'We can confirm that the published footage shows the premises of the temporarily closed Czech embassy in Kabul,' the Ministry of Foreign Affairs later told CTK," or the Czech News Agency.

At the 38-second mark, the misleading video shows a scene that corresponds with this photograph posted on the Czech embassy's official Facebook page on July 26, 2018.

Below is a screenshot comparison of the video shared in the misleading post (L) and the Czech embassy's photo (R):

He wrote: "Oh believers, if someone unreliable brings news to you, investigate it properly. If not, you will hurt a community unintentionally. And later, regret what you have done."

Many alcohol bottles that appeared in the misleading video are from the Czech Republic, including Pilsner Urquell, and the herbal liquor Becherovka.