Skip to main content
Ballots are counted at the tallying center in Downey, California on September 14, 2021 ( AFP / Frederic J. Brown)

Allegations of fraud in California's gubernatorial recall election spread online after Democrat Gavin Newsom survived the vote aimed at unseating him. But claims that the state refused to count in-person votes, that some polling stations told 70 percent of voters they had already cast their ballots, or that the result was determined too rapidly, are false.

Donald Trump and Republican contender Larry Elder set the stage for such claims, warning of foul play before Election Day -- a tactic employed by the now former US president in 2020.

Trump claimed in a statement that "millions and millions" of mail-in ballots would lead to a "giant Election Scam," while Elder said on the campaign trail that he was ready to sue should any "shenanigans" appear, and urged his supporters to report "anything suspicious."

Elder conceded defeat on September 14, but questions over the legitimacy of the vote have persisted. Below, AFP Fact Check examines three such claims.

"Breaking news the state of California is refusing to count in person ballots," a September 15 Instagram post said that included the hashtag "#fraud." 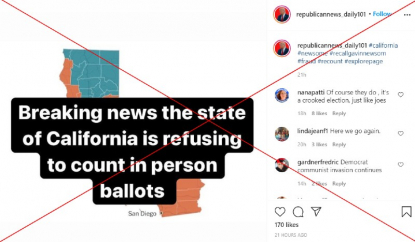 "This claim is clearly false," Mike Sanchez, a spokesman for the office of the Los Angeles County Registrar's office, told AFP.

"On election night our office did tally over 400,000 ballots cast at a vote center in person throughout the 10 day voting period and on election day," Sanchez said -- an assertion backed by the office's website.

More than 87,000 in-person votes were counted in San Diego County, the second most populous in the state.

The California Secretary of State's office did not respond to AFP requests for comment on the issue by the time of publication. 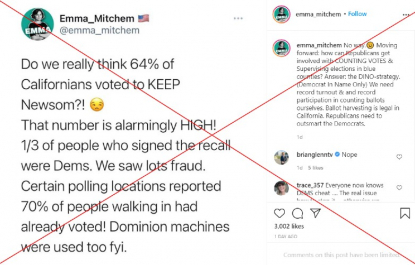 The claim followed reports that some voters in Los Angeles County's San Fernando Valley were incorrectly told they had cast their ballots already -- an issue that affected voters from across the political spectrum.

The office said an emailed statement that certain polling stations in the San Fernando Valley experienced an equipment issue that made it look as though people coming to vote in person early had already checked in.

"The Registrar identified issues with the settings on some of the electronic poll book devices used at these locations to check-in voters prior to issuing ballots," the statement said, adding that "after troubleshooting the issue, the equipment at the locations was replaced and voting continued" over the weekend prior to the election.

Sanchez said only two polling locations in the Los Angeles district of Woodland Hills were affected by the glitch, and that a total of 103 provisional ballots were processed and verified before being included in the election night tally.

More generally, he was confident that the election was fair, saying: "The election process and the results, as they're being tallied now, are secure. The integrity of the election is intact."

Kim Alexander, president of the nonprofit California Voter Foundation, said that this "is one of a total of seven instances that I had heard about problems at voting sites in California."

"California can count 9 million mail in ballots in an hour... but in 2020 we had many other states pauses for weeks? Wake up," said a September 15 Instagram post accompanied by a comment saying: "The more they show their hand the more fraud is apparent."

The post refers to delays in the announcement of Joe Biden's victory over Trump in the 2020 presidential election, which was not called for days in part due to the high volume of mail-in ballots resulting from the Covid-19 pandemic.

But it conflates media calls with official results.

On the day of the vote, the Associated Press made the call that Newsom survived less than an hour after polls closed and before all ballots had been counted -- a process the news agency explains here. Broadcasters CNN and CBS meanwhile projected that the recall had failed to unseat him.

"Media make a judgement call based on how many ballots have been counted and how many are left to count, and then candidates concede or refuse to concede based on how they interpret the media's interpretation of the results as they come in on election night," said the California Voter Foundation's Alexander.

She added that the large margin in favour of the "No" also contributed to a quick call.

This does not make the results official. For instance, on September 15, the Los Angeles County Registrar's office said in a statement that 255,000 mail-in ballots still remained to be counted.

Mail-in ballots in California will be counted as long as they reach county election officials no later than seven days after Election Day, as long as they are signed and postmarked by the day of the vote.

Certified results for the recall will only be announced on October 22 by the California secretary of state here.

All in all, "this was the smoothest election I've ever seen in California," Alexander said.