An image has been shared on Facebook alongside a claim that it shows trucks belonging to the UN’s World Food Programme (WFP) seized by Tigray rebels in northern Ethiopia and used to transport militants and their weapons. But the claim is false: the photo shows WFP trucks delivering food aid in Tigray’s capital Mekelle in July 2021. The UN agency confirmed that none of its vehicles had been seized by rebels.

The photo was posted on Facebook on September 7, 2021, and has been shared more than 80 times. 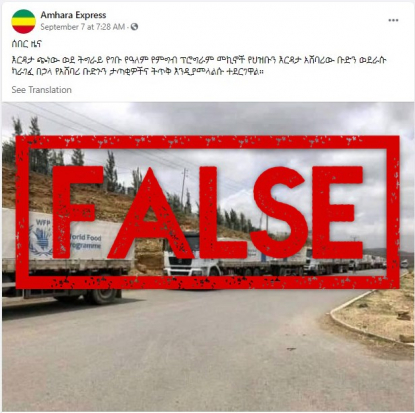 "The terrorist group [Tigray rebel forces] had used WFP vehicles for transporting its militants and military facilities after they forcibly unloaded the humanitarian aid from the convoy in Tigray region," reads the post’s Amharic language caption.

The conflict in northern Ethiopia between government forces and Tigray rebels has claimed thousands of lives and triggered a major humanitarian crisis since November 2020.

But the claim that the photo shows WFP trucks used to transport Tigray rebels and their armour is false.

By conducting a reverse image search, AFP Fact Check found that the picture was lifted from the WFP website.

According to a WFP press release on July 12, 2021, the photo shows a convoy of 50 trucks arriving in Mekelle with 900 metric tons of food as well as other emergency supplies for the local population. 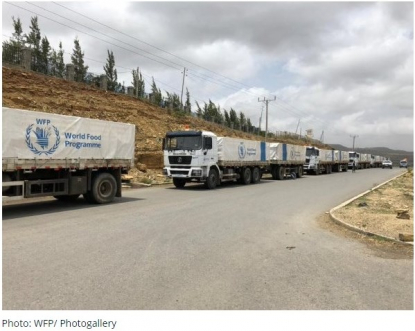 Screenshot of the original photo from the WFP website

“I can confirm that we have received no reports from our staff, the authorities in Ethiopia, or our commercial transport partners of any such misappropriation of trucks in our operations,” he told AFP Fact Check.

Across the Tigray region, four million people — 70 percent of the population — have high levels of acute food insecurity and need emergency assistance, according to the WFP.