This photo shows a Catholic church burned down in Tanzania in 2016, not in Kenya

An image has been widely shared on Facebook in Kenya alongside a claim that it shows a church burnt down by bandits in Laikipia county in Kenya. But the claim is false: the photo shows a Catholic church razed in 2016 in Tanzania.

The photo was posted on Facebook on September 9, 2021. Part of the post’s caption reads: “Kenya Assemblies Of God church in Ol Moran, Laikipia, has been torched by bandits...Thank God there were no casualties (sic).” 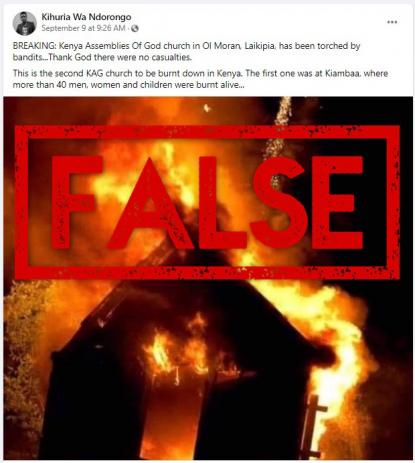 It compared the alleged incident to the burning-down of a crowded church during the 2007/08 post-election violence in Kenya.

A leading broadcaster in Kenya, Citizen TV said bandits had killed people and burned down schools and homes, forcing residents to flee.

A reverse image search conducted by AFP Fact Check found that the photo does not show a church burned down in Kenya.

The picture shows a Catholic church torched in Tanzania’s Kagera region that was burned to the ground in 2016 by suspected arsonists.

An article published by the World Watch Monitor on June 3, 2016, reported that the Roman Catholic church in the village of Nyarwele in Tanzania was razed under unclear circumstances.

The World Watch Monitor is a non-governmental organisation that reports stories of “Christians around the world under pressure for their faith.”

The organisation told AFP Fact Check that the photo shows a "Catholic church burned down in Tanzania in 2016 when unknown arsonists torched a number of churches in the country."

The photo was published in two other publications here and here in 2016.

KAG also dismissed the report of its church being destroyed in Laikipia.

“None of our churches have been burned down, the messages doing rounds on social media are misleading,” KAG told AFP Fact Check.